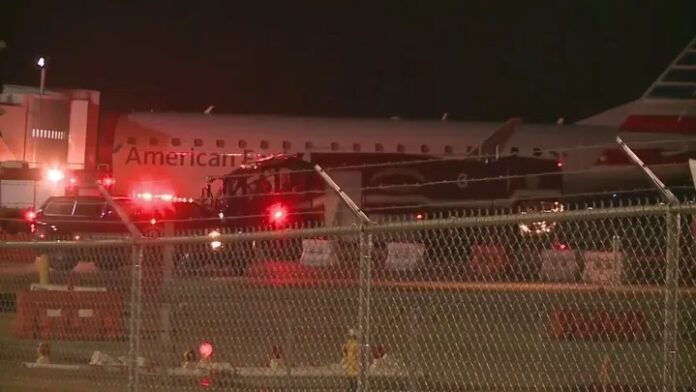 A National Transportation Safety Board review of a New Year’s Eve incident in which a ground crew worker was killed at an airport in Alabama after being sucked into the engine of a plane says the aircraft “shook violently” as it shut off with a “bang.”

The death involving a ramp agent for Piedmont Airlines – a subsidiary of the American Airlines Group – happened at the Montgomery Regional Airport shortly after an Embraer 170 plane operated by Envoy Air landed with 63 passengers on board, the NTSB says.

The ramp agent has since been identified as Courtney Edwards, 34, a mother of three.

The preliminary report states the aircraft had an inoperative auxiliary power unit and that its captain signaled for it to be connected to ground power after arriving from Dallas, opting to “leave both engines running for the required two-minute engine cool-down period.”

As the captain was shutting off the plane’s right engine, he received a message that the aircraft’s front cargo door had opened and “the first officer opened his cockpit window to inform the ramp agent that the engines were still operating,” the report says.

The NTSB found that the captain then told passengers to remain seated until the seat belt sign was turned off and said to his colleague that the airplane’s left engine would be shut down after it was connected to ground power.

“Immediately thereafter, he saw a warning light illuminate and the airplane shook violently followed by the immediate automatic shutdown of the number 1 [left] engine,” the report said. “Unsure of what had occurred, he extinguished the emergency lights and shut off both batteries before leaving the flight deck to investigate.”

The NTSB, citing surveillance video, said Edwards was seen “walking along the leading edge of the left-wing and directly in front of the number one engine” before she was “subsequently pulled off her feet and into the operating engine.”

“Throughout the course of the accident, the airplane’s upper rotating beacon light,” which warns ground crews of ongoing engine activity, “appeared to be illuminated,” the NTSB said.

The report said just prior to the plane’s arrival, the ramp agents held two safety briefings “to reiterate that the engines would remain running until ground power was connected.”

“It was also discussed that the airplane should not be approached, and the diamond of safety cones should not be set until the engines were off, spooled down, and the airplane’s rotating beacon light had been extinguished by the flight crew,” the report added.

One of the ramp agents reported hearing a “bang” as the engine shut down, the NTSB also said.

EXPLAINER: How and when Germany will form a new government

2-year-old killed after shooting in Lawrence, believed to be accidental

39-year-old man shot, killed while trying to avoid stray gunfire from a car in...