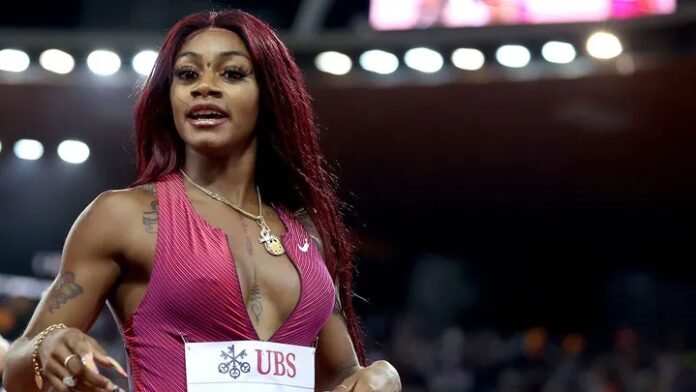 Track and field star Sha’Carri Richardson has kicked off a flight after a verbal confrontation with an American Airlines flight attendant.

In the posts, the 23-year-old claimed the flight attendant disrespected her while she was on a phone call prior to takeoff.

One of the videos posted to Richardson’s Instagram story showed her sitting in her seat aboard the plane.

“Prior to the video this gentleman asked me to get off a cell phone call, I did,” Richardson wrote in a caption after briefly turning her phone to show a flight attendant.

“I stated to him I didn’t like the tone he used with me. Following that while standing in front of me doing the safety protocols he continued to lean over to look at my phone. He asked to see that my phones were in airplanes more at this point. He demanded that I show him. Which I did in front of him.”

Richardson did not specify where she was traveling to, but she did mention that it was “vacation time.” The flight attendant is heard in the video demanding that Richardson stop recording.

The flight attendant’s initial comments toward Richardson were not seen in the social media videos.

Several passengers were heard making various comments about the situation, with one person seeming to tell Richardson to end the argument with the airline employee.

Another video showed Richardson recording herself as she spoke to someone else about the incident. At some point, someone told her, “Thank you, by the way. I’m missing my connection.”

“Oh, so you’re worried about a connection when a grown man is disrespecting me?” Richardson responded.

She later hinted she could pursue some sort of legal action.

“Tell me if I’ll be wrong to pursue legal actions against the airline @americanair not only did the man threaten me but also an innocent bystander who simply just wanted a picture with me,” she wrote in a caption.

Richardson was eventually escorted off the plane, and some passengers applauded.

“Also the captain not doing anything to help the situation and this flight attendant has the applause when I exited the plane when I’m pretty serious the disrespect I received would not have happened if I was one of them,” she added.

Fox News Digital reached out to American Airlines for more information but did not immediately receive a response.

Teenager kills 5 people from his family in Alabama