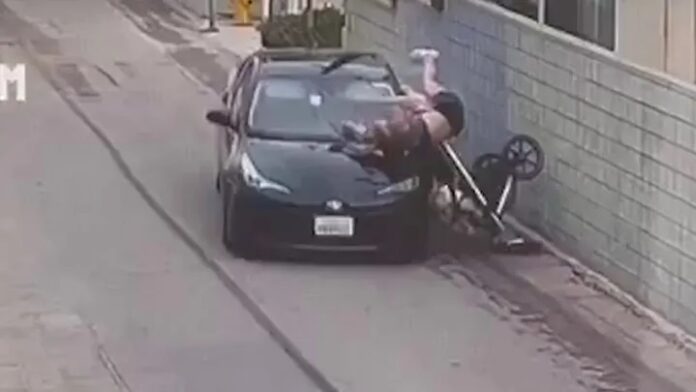 A Los Angeles 17-year-old who ran over a mother walking her baby in a stroller in 2021 and received just a few months of diversionary camp as punishment was gunned down in Palmdale this week.

Kristopher Baca, whom Fox News Digital has previously not identified due to his youth, pleaded guilty to the hit-and-run last year.

Deputies found him dead with gunshot wounds in a Palmdale driveway on the 83600 blocks of 11th Street East Wednesday evening, according to the sheriff’s office.

Sources close to the investigation said he had been at a fast food restaurant earlier trying to “get with a girl.”

As he walked home alone, a car pulled up next to him and an argument broke out. Someone in the vehicle opened fire, then sped off.

The young mother, who has asked only to be identified as Rachel, eventually moved her family out of Los Angeles to get away from what she has described as soft-on-crime policies.

She told Fox News Digital Friday that her husband was out of town when she heard the news, and she had to mull it over alone. She said she was both relieved and saddened by the news.

“The universe delivered the justice we weren’t given in court, but a much harsher punishment than he’d have been dealt in a court of law,” she said.

The case made national headlines last year when Los Angeles District Attorney George Gascon’s office sought a five- to seven-month sentence in juvenile probation camp, a punishment for young offenders described as less severe than military school but harsher than a summer camp.

Gascon’s office told Fox News Digital at the time that the sentence was “an appropriate resolution.” Spokespersons did not immediately respond to a request for comment

The teen was already on felony probation for poisoning a high school girl’s drink at the time of the hit-and-run – which surveillance cameras captured on Aug. 6, 2021.

The video shows a stolen vehicle speeding the wrong way down a one-way backstreet. It plowed into a woman walking her infant son in a stroller. Then he hit the gas, accelerating away from the scene, where a good Samaritan in a pickup truck rammed the suspect vehicle head-on.

Los Angeles police responded and found drugs in the driver’s system and marijuana in the car, according to an incident report obtained by Fox News.

The suspect was 15 at the time of the hit-and-run and asked the court for an early release from his light punishment. A judge denied the request, but he died before his 18th birthday.

“I think I feel shorted – by the system because they didn’t hold him accountable and sad, not for him, but for his mom a little, because if George Gascon actually did his job this kid would still be alive in jail,” Rachel said.

2 dead after fatal crash and shooting by trooper in Virginia

Nearly $1.8 billion of stimulus money went unclaimed in US: Did your state cash...