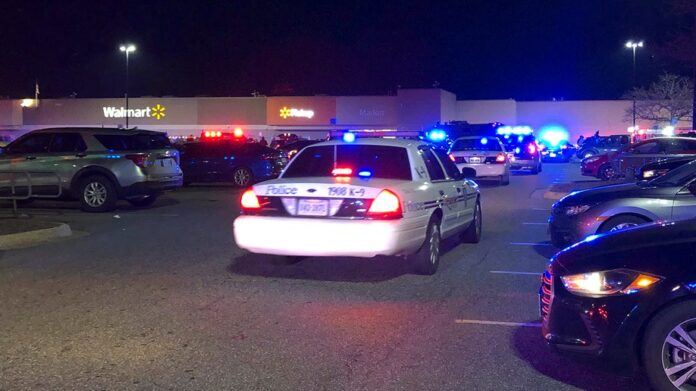 A shooting at a Walmart in Chesapeake, Virginia at night left multiple people dead and several others injured, according to the Chesapeake Police Dept.
A police spokesperson said Chesapeake police responded to an “active shooter” call at the store located along Battlefield Blvd. at approximately 10:12 p.m. When officers arrived, they coordinated with a tactical team to enter the store, where they found multiple bodies, said Chesapeake police spokesman MPO Leo Kosinski.
The shooting happened inside the store, but police have not yet provided information concerning the number of those affected by the shooting. He said the number of fatalities was “less than 10, right now.”
Over 35 to 40 minutes later, officers found multiple dead people and rescued other victims in the store, he added.
One body was found at the entrance of the store, Kosinski said at a briefing.
“It’s sad. We’re a couple of days before the Thanksgiving holiday,” Kosinski added.
Police also believe the lone shooter is dead. The spokesperson did not specify if the shooter was an employee of the store.
The City of Chesapeake confirmed “multiple fatalities” but said many details are pending the police investigation.
“We’re only a few hours into the response, so we don’t have all the answers yet. Chesapeake Police continue their investigation into the active shooter event at Walmart on Sam’s Circle. We do know there are multiple fatalities plus injuries and the shooter is confirmed dead,” a tweet read.
Walmart, Inc. also said it was “shocked” by the “tragic event” and that it was cooperating with law enforcement efforts.
Sen. Mark Warner, D-Virginia, urged residents not to travel near the area of the shooting.
Sickened by reports of yet another mass shooting, this time at a Walmart in Chesapeake. I’ll be monitoring developments closely,” Warner tweeted.
He added: “In the meantime, I urge all those in the community to listen to guidance from local law enforcement and stay away from the scene.”

Virginia state Sen. Louise Lucas, who serves as the President Pro tempore, echoed Warner’s sentiments in a statement calling for an end to gun violence.

Photos and videos of the scene show about 40 emergency vehicles in the parking lot. Other photos show dozens of people standing just outside the store, beyond an area police have tapped off.
Police are urging people to avoid the area as they continue to sweep through the store and conduct their investigation. Members of the public who know someone who works at the store or who may have been affected are being instructed to go to the Chesapeake Conference Center.
The Virginia shooting comes a mere three days after a shooting at a gay nightclub in Colorado Springs, Colorado left five dead and 17 wounded.

2 killed in the shooting of Antioch