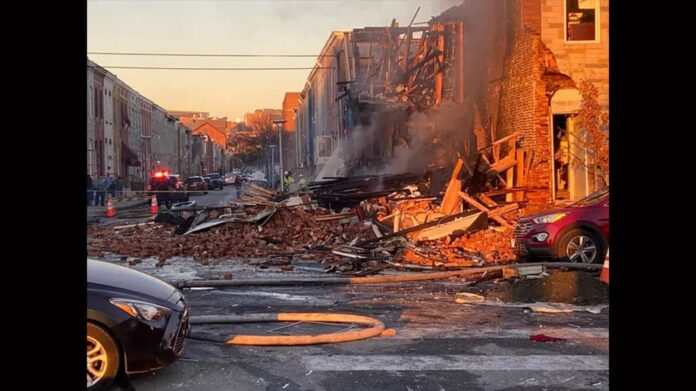 Three people are critically injured after a rowhome exploded in the afternoon in a Baltimore neighborhood, officials say.
The blast happened at a home in the 1100 block of Bayard Street in the Pigtown neighborhood in Baltimore shortly after 2 p.m.
The Baltimore Fire Department said the collapse caused a gas line to rupture sparking a massive fire.
When firefighters arrived, they found three people trapped beneath rubble from the collapse and explosion.
According to the fire department, a 70-year-old man was trying to help two 16 and 48-year-old women who were inside the house at the time of the collapse.
All three victims were immediately transported to the hospital for treatment.
Baltimore Fire said that all three victims were “considered critical,” but have not released an update on their condition.
“The fire is now under control. BGE is on scene digging in the street to gain access to gas lines. An excavator has been requested and en route to assist,” Councilwoman Phylicia Porter said.
“At the present time, possibly three families may need to be relocated. Housing and Red Cross are on scene assisting those families.”
Baltimore Gas and Electric said in a statement that it completed upgrades in October to the gas main that services the site of the explosion.
A house next to the one that collapsed may have structural damage.

BREAKING: Caretaker charged with murder after woman’s body is found entombed in concrete

Las Vegas police shoot and kill a man who attacks a woman in a...