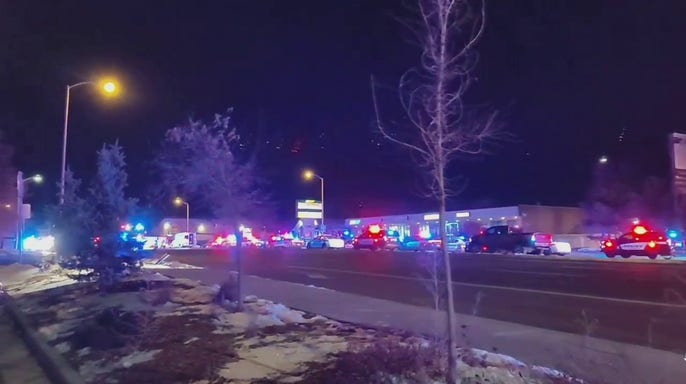 A shooting early morning in Colorado left at least five people dead and at least another 18 injured, according to police.

Colorado Springs Police responded to a shooting at around midnight local time. The incident occurred at Club Q, an LGBTQ+ club, on North Academy Boulevard.
The suspected gunman was taken into custody.

He was transported to the hospital to receive treatment.
Several victims are also being treated at various hospitals.
Colorado Springs Police responded to a shooting at around midnight local time. The incident occurred at Club Q, an LGBTQ+ club, on North Academy Boulevard.
The investigation is in its early stages, and the Federal Bureau of Investigation is on the scene to assist

A spokesperson for the Colorado Springs Fire department told FOX 21 that 34 firefighters and 11 ambulances responded to the scene.
Some ambulances transported multiple people at once.
In a statement posted to their Facebook page, Club Q said they were “devastated by the senseless attack on our community” and that their thoughts and prayers are with the victims, their families, and their friends.
“We thank the quick reactions of heroic customers that subdued the gunman and ended this hate attack,” the club added.

Father raped and sexually abused daughter for 7 years from when she was 7,...