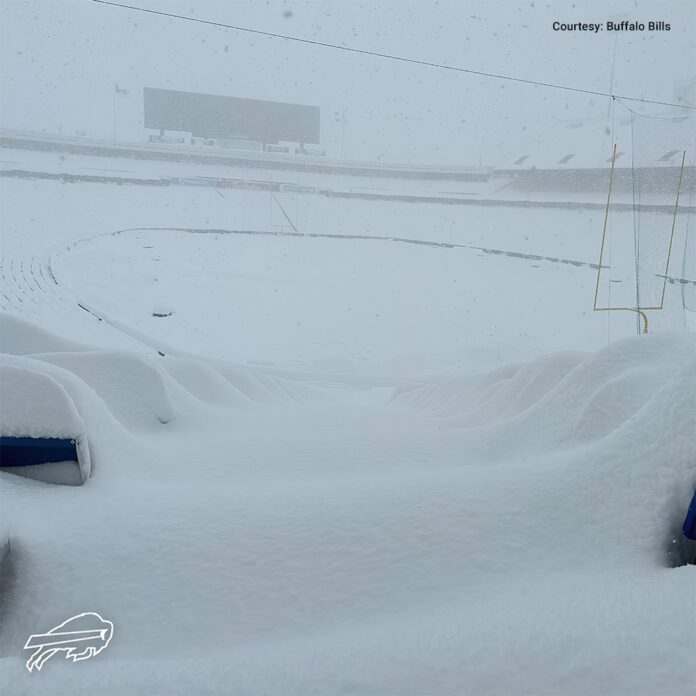 Sunday’s game between the Buffalo Bills and the Cleveland Browns will not be played at Highmark Stadium in Orchard Park, New York, as a massive snowstorm has dumped large amounts of snow on the Buffalo area.

On Thursday, the NFL announced that the game had been moved to Ford Field in Detroit, Michigan, due to the impending weather.

Based on the video provided by the Bills, playing at Highmark Stadium would have proved to be a difficult task.

The Bills announced that their Friday practice had been canceled, choosing to meet virtually instead.

Fox Weather reported that 77 inches (nearly 6.5 feet) of snow had fallen on Orchard Park, NY as of morning.

The Bills are scheduled to leave for Detroit afternoon, with Buffalo Airport announcing that runways had reopened early in the morning.

The last time snowfall forced an NFL game to be relocated was in 2014, when a Bills-New York Jets game was moved to Detroit, according to ESPN.

The league made the decision to move the game from Detroit after speaking with the local and state authorities.

“Due to public safety concerns and out of an abundance of caution in light of the ongoing weather emergency in western New York, the Cleveland Browns-Buffalo Bills game will be moved to Ford Field in Detroit at 1 p.m. ET,” the NFL said in an announcement.

“The decision to move the game from Highmark Stadium in Orchard Park, New York, was done in consultation with the Buffalo Bills and local and state authorities as the region prepares for the storm.”

With Sunday’s game against the Browns being played in Detroit, the Bills will play two games in five days at Ford Field, as they are scheduled to play the Lions on Thanksgiving in Detroit.

One person is killed in a shooting near Antioch and Walmart on Hamilton Church...

A motorcycle driver is killed in a road accident