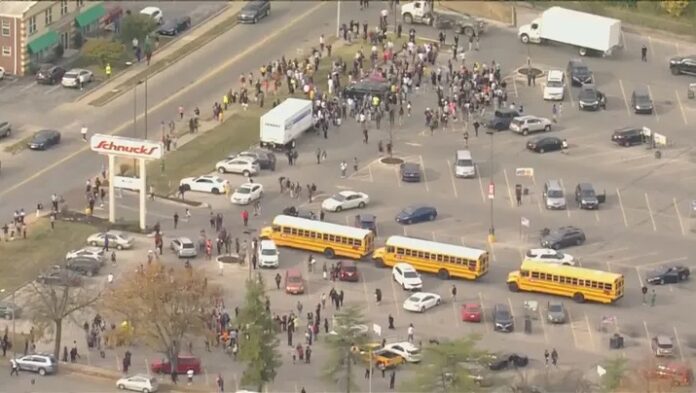 At least six people were wounded in a shooting at a St. Louis, Missouri, high school — including the suspect, who was detained from campus, authorities said.

Shots rang out a little after 9 a.m. at the Central Visual & Performing Arts High School, part of the St. Louis Public Schools, leading students to be evacuated with their hands in the air

“Police are on-site at Central Visual and Performing Arts this morning following reports of an active shooter and both CVPA and Collegiate are on lockdown,” the school district said on Twitter.

“The shooter was quickly stopped by police inside CVPA,” it said.

Nylah Jones, a ninth-grader, said she was in math class when the gunman fired into the room from the hallway, the Post Dispatch reported. Students gathered in one corner of the classroom and tried not to move as the shooter banged on the door, she said.

When they went into lockdown, the children didn’t think it was for real shooting, she said.

Teacher Michael De Filippo told the paper: “Once you heard the boom, all the chuckling and laughing in the back of the room stopped.”

Taniya Gholston, a 16-year-old student, said the assailant’s gun eventually jammed and that she heard him say something about being “tired of this damn school,” the Post Dispatch reported.

The suspect’s identity and condition were not immediately available.

Parents were notified to go to Gateway STEM at 5191 McRee Ave. to reunite with their kids.

The Collegiate School of Medicine and Bioscience is also housed in the CVPA building, which was known as Southwest High School until 1992, the St. Louis Post Dispatch reported.

Court records reveal the name of the suspect charged with chucking cans of alcohol...