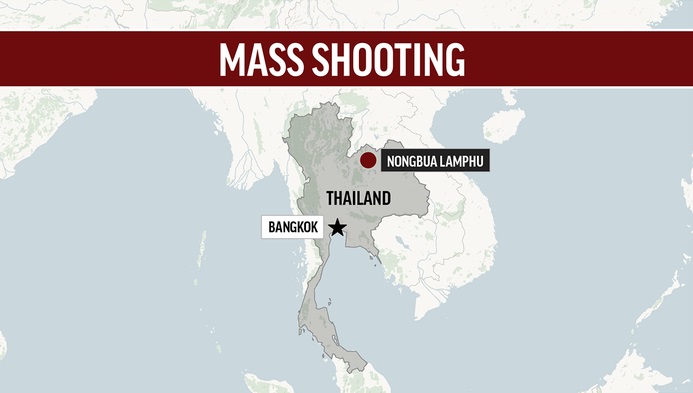 A mass shooting and knife attack at a day care center in northeast Thailand left more than 30 people dead, including children, police said.

The gunman, believed to be a former police officer, took his own life, according to authorities.

The confirmed deaths include at least 23 children, two teachers and a police officer.

The shooting happened in the province of Nongbua Lamphu, around 300 miles northeast of the capital of Bangkok.

According to Thai media reports, the gunman fled the building after the attack.

A manhunt was underway for the suspect before officials confirmed he killed himself. He also reportedly killed his wife and child before the attack.

“The shooter came in around lunchtime and shot four or five officials at the child care center first,” a local official named Jidapa Boonsom told Reuters.

Jidapa said he then forced his way into a locked room where the children were napping and murdered them with a knife.

She added that some of the usual children who come to the day care center were absent that day because of heavy rains.

Mass shootings are rare in Thailand, but in 2020, 29 people were killed in a shooting spree by a disgruntled soldier.

2 killed in fire at abandoned home in West Virginia