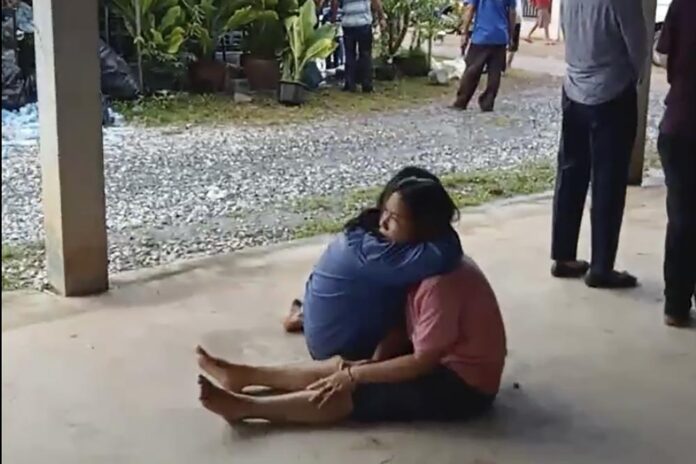 BANGKOK (AP) — A gunman who attacked a child care center in Thailand and then fired from his car as he fled killed more than 30 people, including two dozen children, authorities said.

It was the deadliest mass shooting in the country’s history.

The assailant, identified as a former police officer, killed his wife and child before taking his own life.

Photos and videos posted online of the day care showed the floor of one room was smeared with blood and sleeping mats scattered about. Pictures of the alphabet and other colorful decorations adorned the walls.

In videos, frantic family members could be heard weeping outside the building. Ambulances stood by as police and medical workers walked around.

A witness told Thailand’s Kom Chad Leuk television at the scene that they had locked the door to the building when they saw the suspect approaching with a handgun, but that he shot through it.

“The teacher who died, she had a child in her arms,” said the woman, whose name wasn’t given. “I didn’t think he would kill children, but he shot at the door and shot right through it.”

Authorities identified the assailant as a former police officer and said he entered the child care center after noon in the northeastern Thai town of Nongbua Lamphu.

Twenty-two children and two adults were killed in the building before the assailant fled, according to a police statement. But he continued to shoot people from his car, police Maj. Gen. Paisal Luesomboon told The Associated Press.

Police identified the suspect as 34-year-old former police officer Panya Kamrap. Paisel told PPTV in an interview that he was fired from the force earlier this year because of drug-related offenses.

In the attack he used multiple weapons, including a handgun, a shotgun and a knife, Paisel said.

After arriving home, he killed his wife and child and then himself, police said.

Police said he killed another two children and nine adults outside the child care center, including his wife and his son.

Last month, a clerk shot co-workers at Thailand’s Army War College in Bangkok, killing two and wounding another before he was arrested.

The country’s previous worst mass shooting involved a disgruntled soldier who opened fire in and around a mall in the northeastern city of Nakhon Ratchasima in 2020, killing 29 people and holding off security forces for some 16 hours before eventually being killed by them.

Man shoots his girlfriend and kills a child in Houston