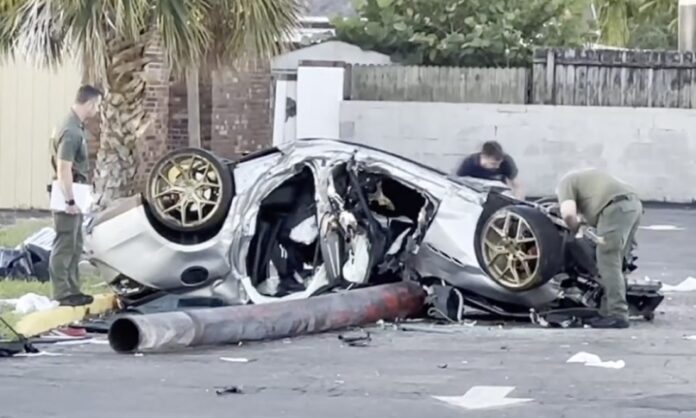 The owner had also left the keys inside the car.

A sheriff’s helicopter was in the area for an unrelated vehicle burglary and spotted the three teens walking down a road and approaching the luxury car.

Aerial video shows the teens opening the doors to the car and driving away.

The driver, later identified as Lang, is seen pulling out of the driveway and driving across the grass onto the street.

Authorities in the chopper can be heard noting that the vehicle is driving “normal” down 62nd Avenue as patrol vehicles approach the vehicle from behind.

Patrol deputies attempted to stop the stolen car, but the teens refused to stop and accelerated to over 100 mph, the sheriff’s office said.

Deputies did not chase after the stolen vehicle in accordance with its non-pursuit policy.

The teens continued speeding a short distance until the driver lost control of the Maserati and hit a curb.

The car launched into the air and flipped over before landing in the parking lot of a business.

The chopper pilot can be heard calling in the crash, noting that none of the three teens had gotten out of the crashed car.

Pictures taken by FOX13 Tampa show the mangled Maserati upside down in the parking lot.

St. Louis woman after eviction: ‘I have no idea’ what to do