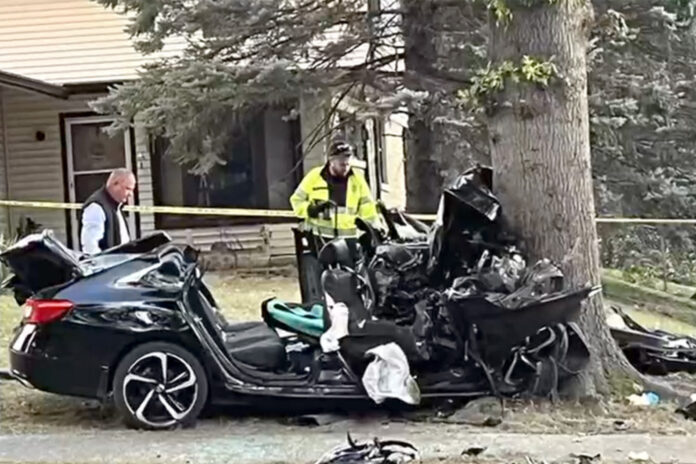 Six young people were killed when their car slammed into a tree in Nebraska — a horrific crash that was detected by the new iPhone 14, which alerted first responders, authorities said.
Five men in the Honda Accord died at the scene of the crash around 2:15 a.m in Lincoln, police said. A 24-year-old woman who suffered critical injuries died later at a hospital.
This is the worst crash in Lincoln in recent memory,” Assistant Police Chief Michon Morrow said. “We’ve been trying to think of another accident this bad and we haven’t come up with anything.”
One of the occupants had the recently released iPhone 14, which can detect a serious car crash, call 911 and alert the owner’s emergency contacts.
The device has a high G-force accelerometer that can sense extreme accelerations or decelerations up to 256 Gs — or 256 times the force of gravity, according to Apple.
The victims in the crash at 56th and Randolph streets included the 26-year-old driver and the 24-year-old woman. The others who died were two 22-year-olds, one 23-year-old and one 21-year-old, according to reports.
The posted speed limit is 25 mph on Randolph Street, the local Journal Star reported.
The impact of the car slamming into the tree awoke Erin Bartak, who thought the car might have struck their house. She alerted her father, Brad, and brother Bronson, according to the paper.
Brad rushed outside and used a rock to break the back window, but the engine soon caught fire. He used a garden hose to try to extinguish the flames with the help of another neighbor until firefighters arrived, the Journal Star reported.
One of the victims was Jonathan Koch, 22, WOWT reported.
“He was the most caring and trusting person ever,” Koch’s sister Kayla Kelley told the station.
She added; “Life is so short. In the blink of an eye, your world is shattering around you. But he would not want us to be heartbroken, he would want us to pick ourselves up and move forward.”
Koch’s other sister, Caleigh Keown, told WOWT: “He also knew no strangers, anyone that knew Johnny knew Johnny very well. I think he would want everyone to remember how much he cared about them, ’cause he was such a caring guy.”
Investigators had not been able to find any witnesses to the crash by Sunday afternoon,
“The cause of this accident is going to take us some time to pin down,” Morrow said. “We are looking at all possibilities, including alcohol, speed or distracted driving.”

1 dead and 2 critical after a car accident in Philadelphia

What is the delta plus variant?