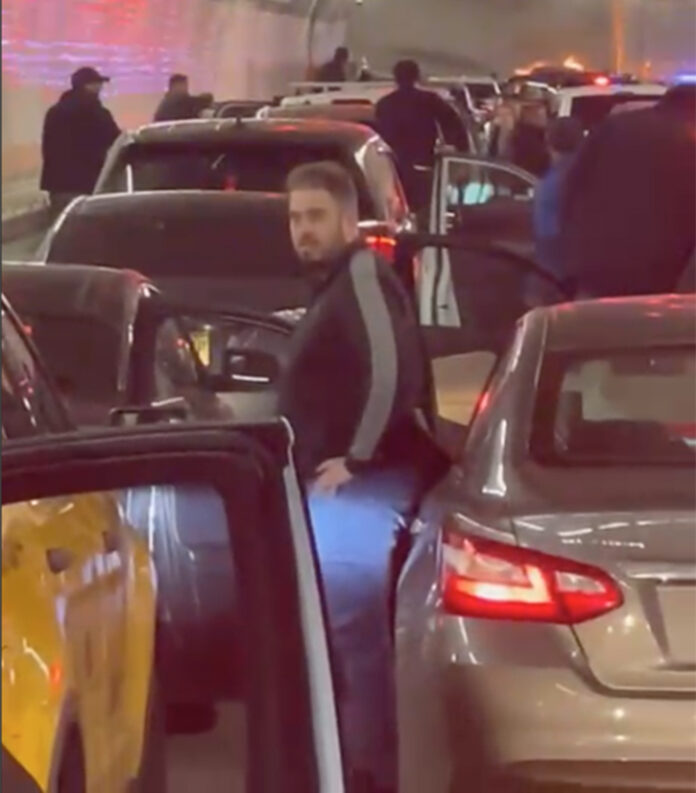 A car became engulfed in flames as it drove through the Holland Tunnel at night, shutting down traffic and filling the south tube with smoke.
The sedan, which was heading toward the city, caught fire around 9 p.m., the Port Authority said.
Authorities blocked all lanes going from New Jersey to lower Manhattan for roughly an hour, snagging weekend traffic returning to the Big Apple.
Dramatic video from inside the 1.6-mile tunnel shows flames shoot out of the sedan as a wall of dark, opaque smoke obscures the exit.
People stepped out of their cars — parked bumper to bumper on the road — to get a peek of the smoky scene as all visible traffic was stalled, another video shows
The red and blue lights of an emergency vehicle bounced off the ceiling tiles of the tunnel, as first responders attempted to put out the fire, according to the footage.
The south tube was reopened just one hour before it was scheduled to close again for repair work.
The New York-bound tube was closed at 11 p.m. Sunday and was expected to reopen at 5 a.m. Monday morning due to ongoing Hurricane Sandy-related repairs.
The scheduled shutdown is part of overnight closures that began in April 2020 and are expected to continue through 2024 in order to make much-needed repairs and storm resiliency improvements.
The Holland Tunnel, which runs underneath the Hudson River, was flooded by Hurricane Sandy in October 2012 with roughly 30 million gallons of water. Electrical equipment and structural elements inside the tunnel suffered latent salt damage