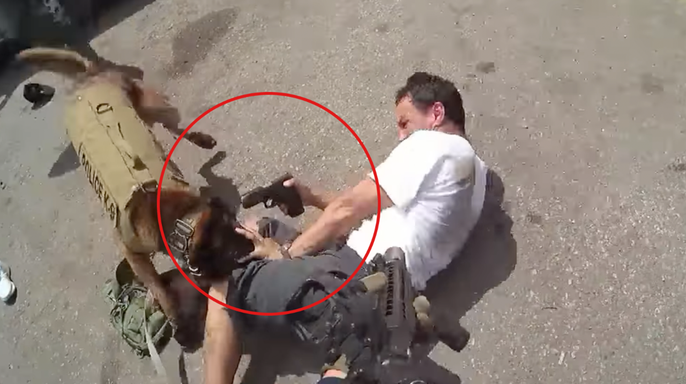 Authorities in Arizona released body camera footage showing a suspect in Tucson pointing a handgun at a police dog’s head before the suspect was fatally shot by officers.

“Police, get down. Police, get down,” Tucson Police SWAT officers were heard yelling at suspect Francisco Javier Galarza, 49, outside a Circle K.
The SWAT team had been surveilling Galarza due to felony arrest warrants connected to a home invasion and bank robbery, the Arizona Republic reported.
“He’s out, just say when,” one of the officers in the body cam footage says before officers exited a vehicle and pursued Galarza.

Galarza refused to comply with officers and tried to flee.
Runner, runner, runner, runner,” an officer yelled as officers ran toward the suspect.
Galarza is seen in the body cam footage, which was released by the Pima Regional Critical Incident Team, pulling a handgun out of a bag while running from officers on the convenience store parking lot.

A police K9 named Kiro was also deployed to help apprehend the suspect. Video footage shows the K9 was able to get Galarza on the ground before the suspect aimed the firearm at the dog’s head.
Law enforcement officials with the SWAT team said the gun was also aimed at officers, prompting two of the cops to open fire on Galarza.
He was administered medical attention before the Tucson fire department arrived, but was ultimately pronounced dead on the scene.
Police later determined he was in possession of a loaded Taurus G3 9mm, the Arizona Republic reported.

The Tucson Police Department told Fox News Digital later that The Pima County Sheriff’s Department will investigate the officer-involved shooting.
Due to the internal investigation that is still open and ongoing, this is the only information we are able to provide at this time,” the statement said.

Police: Man arrested for tattooing child inside a McDonald’s