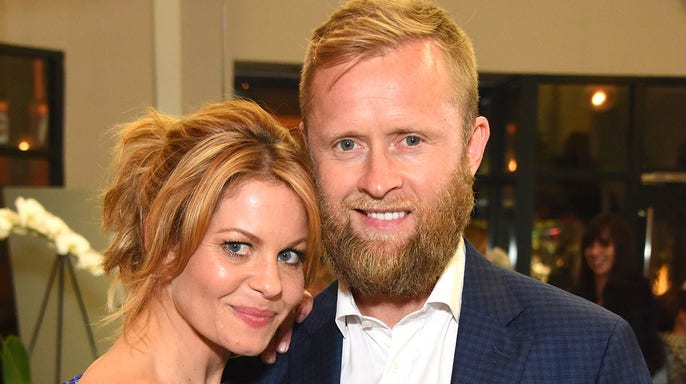 Candace Cameron Bure is celebrating more than 26 years of a happy marriage!
The actress told Mayim Bialik on the “Celebrity Jeopardy!” host’s “Breakdown” podcast this week that she and her husband, former hockey player Valeri Bure, make time for each other and still “love each other physically, spiritually” and “mentally.”
She added that laughter is a turn on for her with her husband and they are both happier when they’ve had sex.

“Laughter is one of my love languages,” she said after the “Big Bang Theory” star asked about where she finds intimacy in her marriage. “I grew up with comedians on the show [‘Full House’]. I’ve been around laughter my whole life. My dad’s a very funny man. Like, I love it. So, I need to have laughter in my life and that does come with a playfulness with my husband so when he can make me laugh – like, it’s the best.”
She said her husband tends to be a bit more “reserved” and “serious about life” than she is, possibly because of his upbringing in Russia, but there’s nothing that attracts her more to him than when he makes her laugh.

“Sex obviously is important,” she said, adding that she hates how “sex within marriage gets such a bad rap.” She acknowledged in some marriages sex can become stale, but she believes “sex is a gift from God to be within the constraints of marriage and that it is to be celebrated and a huge part of marriage
She said sex is a “blessing of being married and committed to someone” and that tired jokes about longer marriages being sexless aren’t accurate in her case.
“I’m not trying to talk about my sex life,” she stipulated, “but I do think it is important to share what a healthy sex life within marriage can be just in saying like that that’s important.”

The Hallmark movie actress said, “It’s an important part of the relationship that we make time for one another, that we still love each other both physically, you know, spiritually, mentally, all of the things. It all comes hand in hand.”
Bure and her husband were married in 1996 after “Full House” ended its eight-season run. The couple share three children: Natasha, 24, and Lev, 22, and Maksim, 20.

Biden: Troops will stay in Afghanistan to evacuate Americans