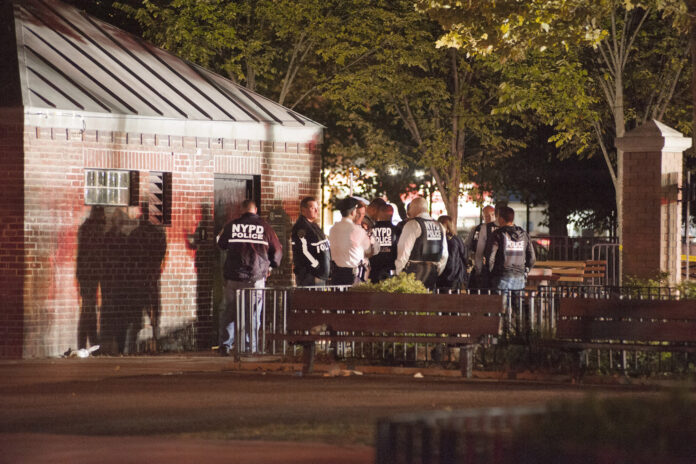 Four innocent bystanders, including two teenagers, were shot at a Queens park as they were caught in the crossfire of two feuding gunmen on night, police sources said.
The victims were near the handball court inside of the London Planetree Playground when the shooters opened fire at each other at about 6:20 p.m., sources said.
But the hail of bullets struck four unintended targets. The youngest victims, a 15-year-old girl and a 16-year-old boy, were shot in the left leg and lower back respectively, sources said.
The teens were taken to Long Island Jewish Medical Center in New Hyde Park, the sources said.
A 20-year-old man was shot twice in the right leg and once in the left leg and transported to Jamaica Hospital Medical Center. And a 32-year-old man was shot once in the left ankle, according to the sources. He was also taken to Jamaica Hospital.
All four victims are expected to make full recoveries, police sources said
One of the suspects is believed to have fled in a black Mercedes Benz SUV, according to the sources.
Police recovered multiple shell casings at the scene.

3 brothers die after being stuck in a manure pit

Plea and a trial loom in next month for Giuliani associates

30 years after the American invasion of Panama, the remains of 70 people were...