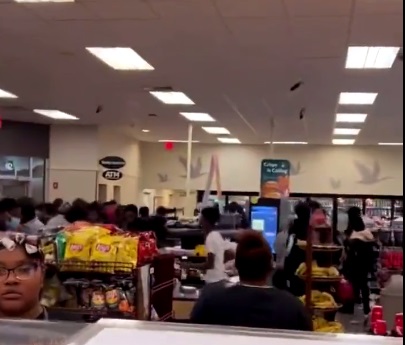 Dozens of people entered a Wawa convenience store in Philadelphia and began ransacking the place.

Footage shows people throwing food and standing on furniture as employees are helpless to stop the chaos.

The aftermath saw trash and products littering the store’s floor as throngs of people milled about outside.

The Philadelphia Police Department confirmed to Fox News Digital that officers are investigating the incident.

The video is only the most recent example of a string of smash-and-grab style crimes, which see organized groups stealing goods from stores with near impunity

Employees of one California Jewelry store fought off attempted robbers earlier this year. Sarah Baca and Dallas Baca were inside their parents’ store, Princess Bride Diamonds when at least four hooded robbers broke in.

“I think this is like our livelihood and… we want California to be great again,” Sarah told Fox & Friends in May. “And this is like our home. We want to defend it. I’ve grown up here my whole entire life.”

“It’s sad … what the state has come to, but I think with … good people all banding together that … all have the same values, we can turn it around, I’m hoping,” she continued.

Footage of the indent shows the brother-sister duo punching and kicking at the would-be robbers until they fled.

“I’d rather get the snot kicked out of me at least trying my best than to just sit in the back and cower if people walk in,” Dallas said. “But we’re definitely taking this as a little bit of a wake-up call, just going to up our security and everything in the store.”

A woman asks a Philadelphia Wawa employee to stop recording and make her sandwich while the store is being ransacked around her..!!

A pedestrian collided with a car in El Cajon, get killed

3 years child kills himself with a gun found in home

Man gets life term for shooting ex-girlfriend, her new boyfriend