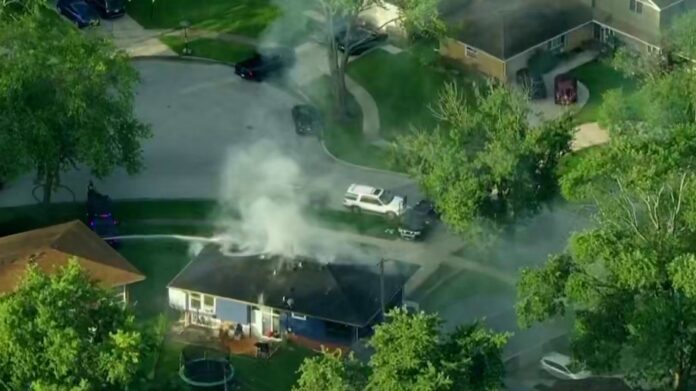 Four people died after an Illinois home caught fire during a barricade situation, according to reports
the Cook County medical examiner confirmed the deaths and that neither the names of the victims nor their causes of death were immediately released.
The station said police had not offered a narrative explaining what lead to the deaths.
The city warned residents that Oak Forest Police had a barricaded subject in the 5500 block of Ann Marie Lane, asking residents to shelter in place.
Heavy police and fire presence on the scene in the 5500 block of Ann Marie. Please be aware that Central Avenue from Independence to 155th Street and 155th Street from Long Avenue to Central Avenue are closed to traffic,” it said on social media
At around 10 a.m., the city said there was “no longer a threat to the community.”
Central Avenue will remain closed as police and fire continue to investigate the incident. 155th Street is open. We will provide a full update later today,” it said.
Streets in the area remain closed and FOX 32 said some Oak Forest community schools were sheltered in place as the situation developed.
Aerial images showed smoke rising from the roof of the home and SWAT members at the scene.
The station reported police said the home was on fire as of 7 a.m. local time and authorities responded to what was called a “domestic situation.”
It said the Oak Forest High School homecoming parade has been canceled.

A woman was killed in a car accident, Lyndal

4 killed in a crane collapse in downtown Seattle