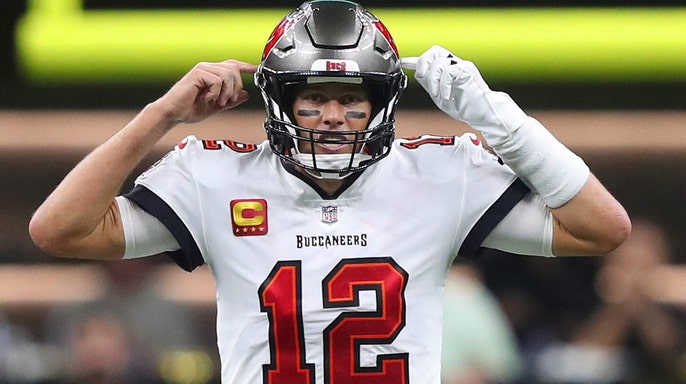 Fitzpatrick said on Barstool Sports’ “Pardon My Take” that Brady “p—-s” him off and seven-time Super Bowl champion had a lack of respect for him throughout his career. Fitzpatrick also claimed he was that “mother f—er” Brady referred to in the episode of “The Shop” in 2021.
Brady, in the latest episode of the “Let’s Go” podcast, said he had no ill will toward Fitzpatrick but did not understand why he was taking the criticism.

Let’s talk about Ryan. And I love Ryan, but for some reason he’s got it out for me. I actually talked to Ryan Griffin, who’s one of our quarterbacks, he said, ‘Ryan’s always all over you. I don’t know why.’ So I don’t know why Ryan is,” Brady said.
“Maybe Ryan and I need to have a talk. Ryan’s a hell of a guy, too. And I’ve competed against him. I mean, he’s a Harvard guy. Now he looks like he’s part homeless. And now he’s on TV doing what my future job’s gonna be. So I think Ryan’s got a good thing going. I’m not sure why he needs to think that I’m after him or something like that.”

Brady added that the “mother f—er” he referred to during the episode of “The Shop” was not Fitzpatrick.
“I like to keep ‘em guessing. And unfortunately with this coming out, I’d have to tell him, it wasn’t him,” Brady said.
Fitzpatrick said in an episode of “The Dan Le Batard Show” he was the guy.
“I think I still am. I think I still am that guy,” he said. “If you go back to that … before the 2019 season when the Dolphins are trying to assemble a roster that is going to help them get a better draft pick the next year, so it’s not like that was going to be an attractive situation for Tom anyway. So, I’m not sure why he was so upset about it, but I still to this day believe that I am that mother f—er.”

The Dolphins were a team involved in trying to sign Brady in 2019 and trying to bring him over at some point in 2022 – whether as a player or minority owner.
Miami was forced to forfeit a 2023 first-round pick and 2024 third-round pick, while team owner Stephen Ross was suspended from team operations through Oct. 17, 2022, and pay a $1.5 million fine as a result of the NFL’s probe, the league said in August.