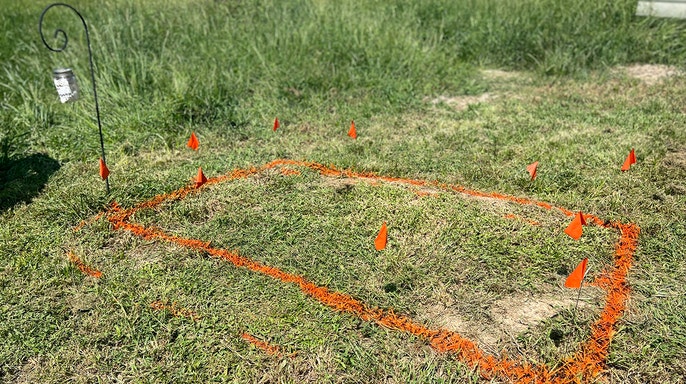 A Texas woman bought a plot of land next to a cemetery outside Houston last year — then visited one day to find what appears to be a new burial underneath her property, according to authorities.
It was not a mistake by graveyard workers, according to the Harris County Sheriff’s Office, and there is no headstone.

But the woman, who deputies referred to only as Mrs. Soza, noticed on Father’s Day that someone had come and left behind fresh flowers and other decorations.

After confirming the mound was located on her property and not within the burying ground, Soza called authorities last month and told a deputy that she had bought an undeveloped 1.5-acre tract of land next to Barrett Station Evergreen Cemetery in Crosby, Texas, in March 2021. Then she said that in November she found “a fresh mound of dirt” on the corner of her property, right next to the graveyard.
Months later, on Father’s Day this past June, her family found “two ornamental wrought iron posts” set up next to the site with a lantern jar and fresh flowers

The Soza family checked the survey for the property, which is about 25 miles northeast of Houston, consulted with the cemetery and, according to the sheriff’s office, determined the mound was placed on their property.

“A cemetery representative advised all plots in their cemetery were accounted for, and the mound was not a misplaced grave,” Sheriff Ed Gonzalez revealed on Twitter. “One possibility is that someone placed the item without authorization and without knowledge of loved ones.”
Soza left a note at the site, requesting whoever left the lantern and flowers to contact her, but she told investigators no one ever did.
Then, the sheriff’s office brought in Texas EquuSearch, the volunteer search and rescue organization that has assisted missing persons cases around the country for more than 20 years, which examined the mound with ground-penetrating radar.

The examination of the mound confirmed that an object, consistent with a burial vault or casket, is buried under the mound,” Senior Deputy Thomas Gilliland told Fox News Digital. “Investigators located the survey marker and confirmed the mound is located on the Sozas’ property.”
Mark Edwards, a search coordinator with Texas EquuSearch, told Fox News Digital on Wednesday that he was able to use ground-penetrating radar to determine that a rectangular object was buried below the surface.

Then he used a probe and poked into the soil.
“We marked it and GPS verified its location and documented that, and I also put a probe in the ground and came upon something 3.5 feet down,” he said. “It actually made a thumping sound. An assumption could be made that that was a lid to a vault.”
Edwards said the size and shape, as well as the fact that someone had left flowers, made him suspect it had either accidentally been buried on the wrong side of the property line or that someone intentionally put it there.

But, he added, he can’t be 100% certain there’s a casket buried there without digging it up for a look.
“So, what we were attempting to do is put enough information out to the media and on social media in the hope that someone will recognize it and come forward, and say, ‘Hey, that’s my loved one,’” he said.
If no one comes forward, authorities will have to seek a court’s permission to dig up the casket and search inside, he said.
“It’s a real mystery, and I can’t wait to see how it ends up being solved,” Edwards said. “There are some missing people in that part of Harris County, but I just don’t see perpetrators going through such great lengths to hide their dirty deeds.”
Anyone with information is asked to call the sheriff’s homicide unit at 713-274-9100.
In the 22 years since its founding, Texas EquuSearch has assisted more than 2,000 cases, helping recover 428 missing persons alive and the remains of 326 deceased victims, according to its website.

The group has recently assisted with high-profile cases, including those of Dylan Rounds, the 19-year-old Utah farmer who vanished under suspicious circumstances in May, and Summer Wells, the Tennessee 6-year-old who went missing from her parents’ home last summer

Violence ‘interrupters’ will be placed along Beatties Ford Road corridor

Justice Kavanaugh tests positive for COVID, has no symptoms