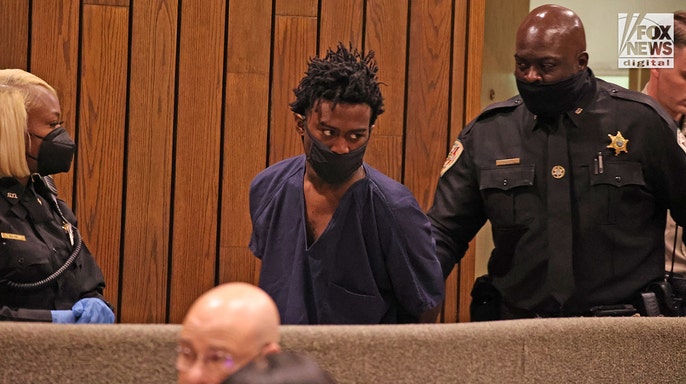 Ezekiel Kelly stood before a judge Friday morning after allegedly opening fire in a string of deadly shootings in and around Memphis, parts of which were captured on videos obtained exclusively by Fox News Digital.
Appearing in a Shelby County courtroom wearing a dark blue-colored jail-issued jumpsuit and a face mask, a wide-eyed, serious Kelly spoke briefly to tell Judge Karen Massey he understood he needed an attorney and that he did not have any questions. He is represented by public defender Jennifer Case, the same lawyer defending alleged Eliza Fletcher killer Cleotha Henderson.
During the court appearance, Massey acknowledged that the death penalty is possible. Case requested a gag order be implemented, and the jurist scheduled a motion hearing for Sept. 13.
Kelly did not enter a plea and no bond was set during the hearing. District Attorney Steve Mulroy said additional charges against the defendant were likely to come.
Mulroy acknowledged that the public was “concerned.”
“They’re concerned about a horrible week we’ve had here in Memphis,” the newly elected top prosecutor said. “We understand how the public feels and we want to reassure the public that we and law enforcement are working around the clock on these cases to prevent things like this from happening in the future.”
He added that public safety is his and law enforcements’ “absolute number one priority.”
“I’ve said this before, and I think it bears repetition. This office takes repeat violent offenders very seriously,” he told reporters. “It merits a strong response.”
Kelly, 19, has a prior felony conviction for aggravated assault in connection with a 2020 shooting. He served 11 months of a 3-year sentence and was released in March, according to authorities.
Now he stands accused of killing four and injuring three, in addition to a pair of armed carjackings
Paramedics pronounced the first victim, Dewayne Tunstall, dead outside a Lyndale Avenue home just after 1 am
Three unidentified witnesses who were at the home at the time told police that Kelly asked Tunstall to talk in private and then, after a short conversation, allegedly opened fire.
Several hours later, Kelly allegedly embarked on a shooting spree in and around Memphis, prompting police to urge residents to shelter in place.
According to a man who lives in the neighborhood of the first shooting, the alleged gunman and Tunstall were childhood friends.
At least two of the bullets went into the house, including one through the window, which had toys stacked just inside. A bedridden elderly woman also lives in the home next door, just a few feet away from the shooting.
The family inside could hear the gunshots and then screams after Tunstall’s slaying, according to the area resident, who spoke with Fox News Digital on condition of anonymity out of concern for his safety.
Hours later, the teenager allegedly snapped – kicking off a chaotic shooting spree that caused Memphis police to ask residents to shelter indoors.
The bloodshed kicked off with an apparently random shooting at the AutoZone store which left Rodolfo Berger critically injured around 5:45 p.m. CT. Kelly allegedly livestreamed this attack on Facebook – but the social media giant quickly removed the video and later shut down his entire account.
Surveillance video obtained exclusively by Fox News Digital shows the moments Ezekiel Kelly allegedly pulled up to a Memphis AutoZone store on Jackson Avenue and opened fire on a random victim – with children playing just a few yards away.
“You think I’m playing,” he can be heard as he opens the front door. “This s— is so real, my God.”
The cellphone camera is lifted up, showing the victim turning a corner around an aisle, and two shots ring out.
Moments earlier, children could be seen playing in the corner of the parking lot. The muzzle flashes were recorded on surveillance video from a business across the street.
Another video shows the children running back and forth in the parking lot before the gunman pulls up in a black car, slips through the front door of the auto parts store and opens fire. Within seconds, he hustles back to the car and speeds away, heading south on Jackson Avenue.
After he guns it away from the scene, bystanders can be seen rushing toward the store to help the victim.
Workers at the nearby Family Dollar store said a witness ran in and warned them of the shooting, and within minutes the district manager called and told them to lock the doors and shelter in place.
The rampage went on for hours, ending around 9 p.m., after Kelly allegedly crashed a stolen car at the intersection of Ivan and Hodge roads. Police arrested him at the scene. He smiled in his mugshot.
Kelly had previously pleaded guilty to aggravated assault for another shooting in 2020 as part of a deal to avoid stiffer penalties on charges of attempted murder.
He then served just 11 months out of his three-year Tennessee prison sentence and was released in March, prison records show.
“If Mr. Kelly served his full three-year sentence, he would still be in prison today and four of our fellow citizens would still be alive,” Memphis Mayor Jim Strickland said in a statement