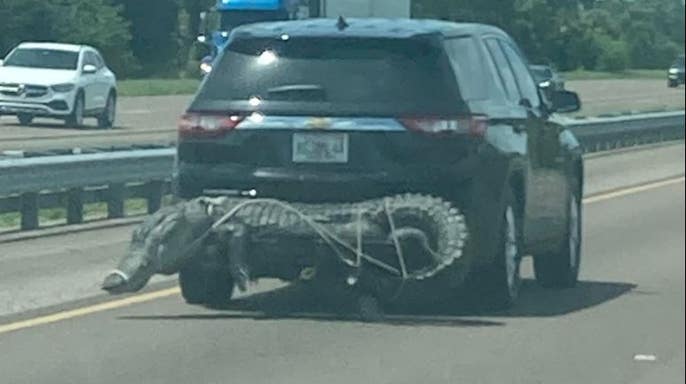 rivers along a Florida Interstate were in for a surprising sight when they happened upon a massive alligator hitching a ride on the back of an SUV.

On Labor Day weekend, Karen Kress was driving along I-95 in Brevard County when she snapped a picture of an alligator tied to the rear of the Chevy SUV. Kress said she was going 70-mph when she spotted the scaly reptile.

Kress posted the picture on Facebook with the caption, “Spotted on I-95 yesterday. I’m accepting suggested captions….obviously this is in floriduh.”
“What a souvenir!!” one person commented. Another said, “See you later, alligator.”
The giant gator appeared to be tied up from tip to tail. Rope can be seen wrapped around the animal’s head, body, and tail.

One person noted how the alligator was harvested during Florida’s alligator hunting season. “You can see the yellow gator ‘tag’ fastened to his tail,” Kevin Barfield commented.
According to Florida Fish and Wildlife Conservation Commission, alligator hunting is legal, but there are guidelines.

Alligator hunting was established in 1988, due to the growing need for population control of the 1.3 million alligators in Florida.