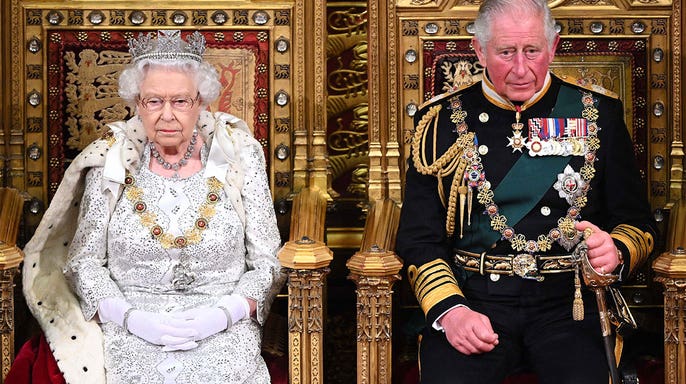 The former Prince Charles has become the king of England following the death of his mother, Queen Elizabeth II.
Queen Elizabeth II, Britain’s longest-reigning monarch who served as the beloved face of her country and source of strength for seven decades, died at Balmoral Castle in Scotland. She was 96.

Charles ascended to the kingship immediately upon the death of his mother, according to British laws of succession.
The new king’s coronation and first formal appearance as the head of the commonwealth is not yet scheduled — Charles is expected to stay the night at Balmoral with the rest of the Royal Family.
Charles has not yet made public his intended regal name.
Charles Philip Arthur George, the son of the queen and Prince Philip, the Duke of Edinburgh, was born on Nov. 14, 1948, in Buckingham Palace.

The prince’s mother was proclaimed queen at age 25 when her father, King George VI, died in 1952 at age 56. On the queen’s accession to the throne, Prince Charles, as the sovereign’s eldest son, became heir to the British throne.
Charles took on the traditional titles of the Duke of Cornwall under a charter of King Edward III in 1337; and, in the Scottish peerage, of Duke of Rothesay, Earl of Carrick, Baron Renfrew, Lord of the Isles, and Prince and Great Steward of Scotland.
Charles was just four years old when he attended his mother’s coronation at Westminster Abbey in 1953. He was seated alongside his widowed grandmother, Queen Elizabeth The Queen Mother, as well as his aunt Princess Margaret.

As opposed to having a tutor at the palace, the queen and the duke decided that the prince should attend school at Hill House in West London. After 10 months, he then became a boarder at Cheam School, a preparatory school in Berkshire. The queen named Charles as the Prince of Wales and Earl of Chester when he was just nine years old. In 1962, Charles began his first term at Gordonstoun, a school near Elgin in Eastern Scotland where his father previously attended
Charles spent two terms in 1966 as an exchange student at Timbertop, which is noted as a remote outpost of the Geelong Church of England Grammar School in Melbourne, Australia. In 1967 he attended Cambridge University to read archeology and anthropology at Trinity College. For the second part of his degree, he changed it to history.

In 1969, Charles was invested as Prince of Wales during a ceremony at Caernarfon Castle. Before the event, the prince spent a term at the University College of Wales at Aberystwyth where he learned how to speak Welsh. The following year in 1970, Charles took his seat in the House of Lords. In 1971, Charles flew himself to Royal Air Force (RAF) Cranwell in Lincolnshire to train as a jet pilot.
Charles followed in the footsteps of his father, grandfather and both great-grandfathers by pursuing a naval career. According to the royal website, Charles qualified as a helicopter pilot in 1974 before joining the 845 Naval Air Squadron, which operated from the Commando carrier HMS Hermes. In 1976, Charles took command of the coastal minehunter HMS Bronington for his last nine months in the navy.
In 1981, Charles married Lady Diana Spencer, who became HRH The Princess of Wales, in St. Paul’s Cathedral. The Prince and Princess of Wales welcomed their son Prince William in 1982, followed by Prince Harry in 1984. William is next in line to the throne.

In 1992, it was announced that Charles and Diana had agreed to separate and the marriage was finally dissolved in 1996. Diana, who was still considered to be a member of the British royal family, continued to live in Kensington Palace.
At age 36, Diana was killed suddenly in 1997 from injuries she sustained in a Paris car crash. At the time of her death, Charles flew to Paris with her two sisters to bring her body back to London. On the day of the funeral, Charles accompanied his sons, who were 15 and 12 at the time, as they walked behind the coffin to Westminster Abbey.
Following Diana’s death, Charles asked the press to respect his children’s privacy as they attempted to lead a normal school life. William and Harry would go on to accompany their father in several royal engagements, both in the UK and overseas.
In 2005, Charles married Camilla Parker Bowles. Following the ceremony, she became HRH The Duchess of Cornwall.
Charles’ father, who spent more than seven decades supporting his wife, passed away in 2021 at age 99.

Today, Charles serves as either patron or president of more than 400 organizations. His causes support the environment, global sustainability, opportunities for youth, education and faith.
On Feb. 5, 2022, the queen offered her support to have the Duchess of Cornwall become Queen Camilla during a special Platinum Jubilee message. To mark the 70th anniversary of her accession to the throne, the monarch expressed a “sincere wish” that Camilla be known as “Queen Consort” when Charles succeeds her to the throne.
The Queen was preceded in death by her husband, Prince Philip, who spent more than seven decades supporting the queen.
The Duke of Edinburgh, Britain’s longest-serving consort, died in April 2021 at age 99.

Elizabeth and Philip were married for more than 70 years and had four children: Prince Charles, Princess Anne, Prince Andrew and Prince Edward.

NYC hit with bevy of violent crime ahead of holiday season that includes ‘wooden...

The death of a newborn child after being left in a hot car “for...