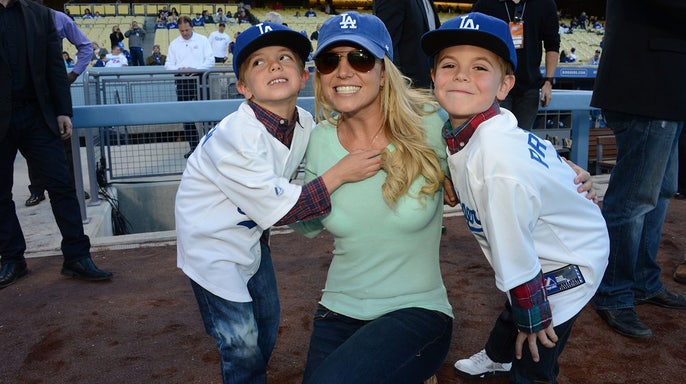 Britney Spears’ sons are breaking their silence on where they stand with their mother.
Sean, 16 and Jayden, 15, sat down with filmmaker Daphne Barak to discuss Spears in an interview that airs.

Jayden shared that he has “no hate” for his mother despite not attending her wedding to Sam Asghari.
“I 100% think this can be fixed,” he said, per the Daily Mail. “It’s just going to take a lot of time and effort. I just want her to get better mentally. When she gets better I really want to see her again.”
Addressing Spears during the interview, he added, “I love you a lot, I hope for the best for you. Maybe one day we can sit down like this and talk again.”

Jayden addressed his absence from his mother’s June wedding. “At the time it just wasn’t a good time to go. I’m not saying that I’m not happy for her,” he said. “I’m really happy for them, but she didn’t invite the whole family and then if it was just going to be me and Preston, I just don’t see how that situation would have ended on good terms.”
According to Jayden, the brothers are “very united” and are each other’s support system.
Preston and I are very united. He is always looking out for me and I am looking out for him. We make sure that we are both healthy mentally,” he said
Addressing growing up with a mother as famous as Spears and dealing with the media surrounding her conservatorship, Jayden said, “There was this TV and it just showed all these people,

and it showed her singing and dancing on the stage, and when I saw that I was like ‘Wow, that is a lot of people’ and I came to the realization of how famous she was and how successful she is as a person and that inspired me.”
Spears 13-year conservatorship came to an end in November. Jayden shared that his grandfather, Jamie Spears, “doesn’t deserve all the hatred he is getting in the media. I love him, with all my heart. He was just trying to be a father.”
He added: “At first he was just trying to be like any father letting her pursue her daughter’s dream of becoming a superstar but I did think maybe the conservatorship went on too long, probably why my Mum was very angry about the whole situation that she was working for too long and I personally think she was. She should have taken a break and relaxed.”
Jayden shared that his older brother, Sean, is not a fan of the cameras and asked Spears not to post pictures of him online which she did anyway and “it didn’t go well.”

He said that posting on Instagram “helps” his mother. “Social media helps her,” he began. “So if that’s what she wants to do that’s what she wants to do, I’m not going to hate her for that. At the same time, she should come to the realization of whatever it is that stops her loving her family.”
Jayden continued: “It’s almost like she has to post something on Instagram to get some attention. This has gone on for years and years and years and there’s a high chance that this will never stop but I’m hoping for me that she will stop.”
During the two boy’s childhood, Jayden shared that Spears has “treated me better” than Preston.
“I think Mom has struggled giving us both attention and showing us equal love & I don’t think she showed enough to Preston and I feel really bad for that,” he began. “We’ve both been through so much pressure in the past that this is our safe place now, to process all the emotional trauma we’ve been through to heal, heal our mental state.”
Spears and Federline married in October 2004 after dating for nearly 10 months.

Their divorce was finalized in July 2007. The two exes have been battling it out on social media after Federline shared three videos where he accused the star of scolding their sons.
His since deleted post and explosive interview with the Daily Mail received a comment from Mathew Rosengart, Spears attorney, who said they will “not tolerate bullying in any area.”

‘We are not going to do it.’ Gov. McMaster encourages vaccines, won’t require masks...