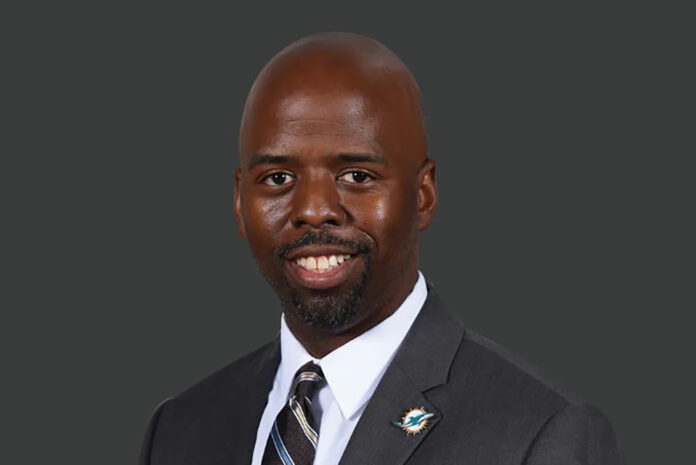 Jason Jenkins, the Dolphins’ senior vice president of communications and community affairs, died Saturday, the team announced at halftime of its preseason game against the Eagles. He was 47.
The cause of death is not known. The Palm Beach Post reported Jenkins died after “a medical emergency.”

Jenkins had been a senior VP since 2015 and worked for the Dolphins since 2009
“I am heartbroken,” Dolphins owner Stephen Ross said in a statement. “Jason Jenkins was an icon in the Miami community, and above all a kind and incredible family man.
His dedication to our organization was unmatched. He was my friend but most of all he was a generous soul.
My heart is with Elizabeth and his children tonight.
The Jenkins family will always be a part of the Dolphins family

Jenkins graduated from Texas Tech with a bachelor’s degree in journalism in 1997. A Houston native, he was honored with an Outstanding Alumni Award in 2017 and later gave the commencement address. He worked for the 49ers, Texas Southern University, and Lehigh University prior to the Dolphins.
In addition to working for the Dolphins, he was also a board member for the Anti-Defamation League Florida, Breakthrough Miami, Dolphins Challenge Cancer, Pro Sports Assembly, Urban League of Broward County, Women of Tomorrow, and YWCA Miami.

Our hearts are broken and grieving the loss of a man who was a dear friend and beloved by so many people,” Dolphins president and CEO Tom Garfinkel said. “Jason faithfully served the Dolphins organization for 14 years, was a beacon in the community, a trailblazer and champion for others, and above all, treated people with a kindness and dignity that left a lasting mark on everyone he met.”
Jenkins is survived by his wife, Elizabeth, and three children: Liya, Aiden, and Sloane

The couple, found dead on a California hiking trail, probably tried to save the...

The freelancing boom may change how you buy life insurance