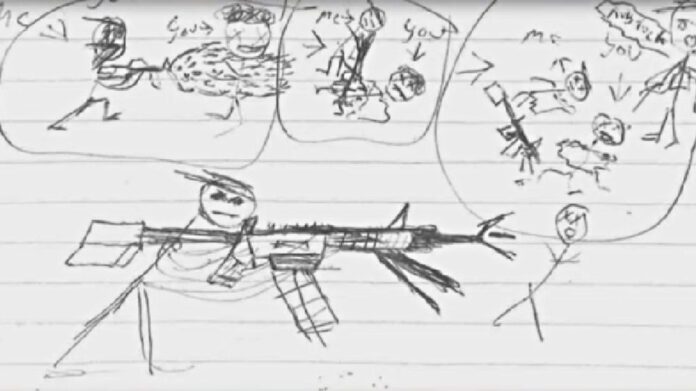 Parkland, Florida, school shooter Nikolas Cruz’s drawings from jail reveal the dark corners of his mind, according to local reports.

Cruz is being tried for the Feb. 14, 2018 shooting at Marjory Stoneman Douglas High School that left 17 people, including 14 students and three staff members, dead. Cruz pleaded guilty in October to 17 counts of first-degree murder.
“I do not want to be bothered by anyone or anything. I can’t wait to die. Blood, blood. I only wanna see blood fall,” Cruz wrote on one page of the drawings obtained by WSVN and FOX 13 Tampa.
Other drawings show a figure shooting people with a rifle, monster-like faces, pentagrams, the numbers “666,” and the phrase, “Hail Satan!”
The shooter also pleaded for the death penalty on one page, according to FOX 13, writing, “I do not want life please help me go to death row!”

Cruz’s defense team began their testimony on Monday, arguing for life without parole instead of the death penalty. The shooter often spends his time doodling in a notebook while he is held in solitary confinement, his attorneys said.
Cruz’s lead attorney, Melisa McNeil, said Cruz has fetal alcohol and drug issues, and his adoptive mother was unable to properly care for him growing up after her husband died suddenly when Cruz was 5 years old.
He is a brain-damaged human,” McNeil said.
While “everyone knows there is one person responsible for all that pain and all of that suffering, and that person is Nikolas Cruz,” McNiel said she hopes jurors know the law “never requires you to vote for death.”

The shooter’s half-sister, Danielle Woodward, described a tumultuous upbringing with a mother who drank, smoked crack and prostituted herself while her children were around. Woodward is currently residing at the Turner Guildford Knight Correctional Center, awaiting her own trial for allegedly car-jacking a 72-year-old woman in January 2020.

Man fatally shot by Detroit police after attack on officer