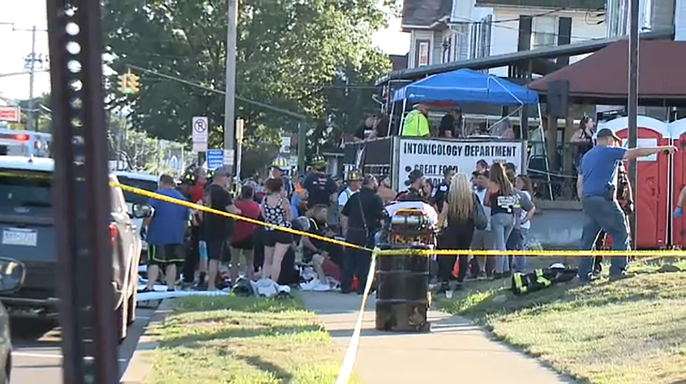 A suspect in Eastern Pennsylvania has been arrested after he drove through a crowd of people at an event honoring victims of a recent fire and later assaulted a woman, police said.

Pennsylvania State Police Bloomsburg received a call to assist Berwick Police Department with a vehicle that drove through a crowd at a community event on West 2nd Street, Berwick Borough, Columbia County,” a statement said.

WNEP-TV reported that the crash happened at a day-long event meant to benefit the families of 10 people killed in a recent fire in Nescopeck, Pennsylvania.
State Police said the same suspect believed to be responsible for the crash was found later in Luzerne County, where police received a call of a male suspect beating a woman.
“Upon Troopers arrival, they discovered a female deceased and a male who was detained by a Municipal Police Department,” the statement added. The suspect remains in custody at PSP Shickshinny, awaiting criminal charges.
The Borough of Berwick Police Department did not immediately respond to a request for comment from Fox News Digital.

Investigations into both incidents remain active.
The Columbia County District Attorney’s Office along with the Troop N Major Case Team are investigating the homicide incident in Berwick, Columbia County,” PSP said.
The suspect’s name has not been released.
Anyone with information, including video surveillance or photos of either incident, is encouraged to call PSP Bloomsburg at 570-387-4261 or PSP Shickshinny at 570-542-4117.