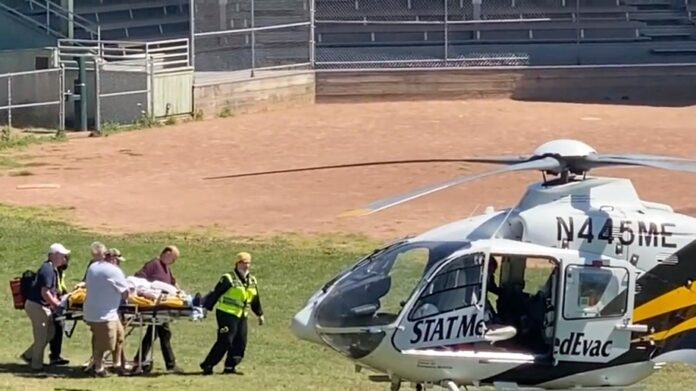 New York State Police identified the man who allegedly stabbed author Salman Rushdie during a speech in Chautauqua, New York
A spokesperson for the New York State Police identified the suspect as Hadi Matar, 24, who allegedly “jumped onto the stage” and stabbed Rushdie “at least once in the neck.”
Rushdie is undergoing surgery at an area hospital, according to the spokesperson.
Andrew Wylie, an agent for Rushdie told the New York Times that the author is on a ventilator and cannot speak.

“The news is not good,” Wylie said. “Salman will likely lose one eye; the nerves in his arm were severed; and his liver was stabbed and damaged.”
Rushdie was stabbed multiple times before a speech at the Chautauqua Institution in an attack that also injured the moderator of the event.
“Rushdie suffered an apparent stab wound to the neck, and was transported by helicopter to an area hospital,” the New York State Police said in a statement following the attack. “His condition is not yet known. The interviewer suffered a minor head injury. A State Trooper assigned to the event immediately took the suspect into custody. The Chautauqua County Sheriff’s Office assisted at the scene.”
New York Gov. Kathy Hochul said during a press conference that the state trooper involved “stood up and saved” Rushdie’s life.
The Chautauqua Institution is a performing arts center and community from June through September that hosts major artists and celebrities like Rushdie related to the fields of visual arts, dance, theater and music.

It is an exclusive institution near Buffalo that carries entry fees ranging from $200-$2,600
Rushdie has lived under the threat of a fatwa on his life issued by Iran in 1989 after he published a book called “The Satanic Verses” that was banned in the country and considered blasphemous by some Muslims.
Iran has also offered over $3 million in reward for anyone who kills Rushdie.
Iran’s government has long since distanced itself from Khomeini’s decree, but anti-Rushdie sentiment lingered. In 2012, a semi-official Iranian religious foundation raised a bounty for Rushdie from $2.8 million to $3.3 million.

Olympics carry a question: What does it mean to be Japanese?