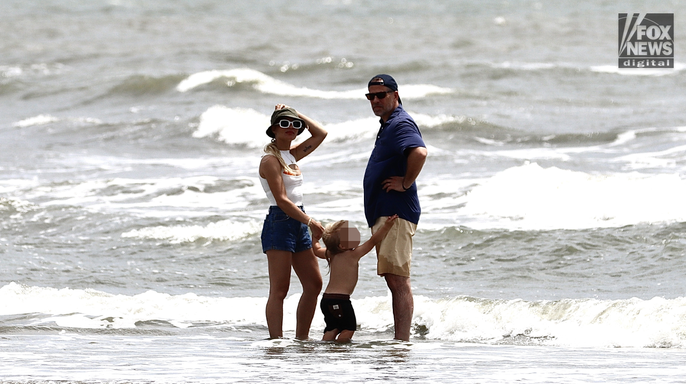 President Joe Biden’s son Hunter was spotted vacationing with the family on South Carolina’s affluent Kiawah Island as legal questions regarding his foreign business dealings and tax practices continue to swirl
The Biden family flew to South Carolina on Thursday for a vacation that is expected to last one week.
In the photos from the vacation obtained by Fox News Digital, Hunter, his wife Melissa Cohen and what appears to be their 2-year-old son Beau can be seen frolicking in the South Carolina surf.
Another photo shows Biden and Cohen embracing and leaning in for a kiss as Beau looks on.
The president and the first lady departed the White House by motorcade to Joint Base Andrews outside the capital, where Air Force One was on hand to take them to Joint Base Charleston.
The president and first lady were joined on Air Force One by Hunter and his family.
The Bidens are staying at a nine-bedroom private residence owned by prominent Democrat donor and friend of the family Maria Allwin.
The residence is valued at $20 million, the New York Post reported, and a source told the outlet that the Bidens are staying at the home free of charge.

“They stayed here before and they’re not paying,” the source said. “They’ve never paid. They’re just friends.”
The Associated Press reported that the White House did not respond to requests to provide details on Biden’s vacation schedule, activities or when exactly he planned to return to Washington, D.C.
The Biden vacation comes the same week Fox News Digital reported that Hunter Biden and his longtime business partner Eric Schwerin were actively working behind the scenes in 2016 to solicit donations for a top former Biden adviser’s congressional campaign while also working on Chinese business deals with the adviser’s business partner.
Hunter Biden, Melissa Cohen, and their son Beau
Hunter Biden, Melissa Cohen, and their son Beau (mom&paparazzi for Fox News Digital)
In addition, an investigation into Hunter’s tax affairs, which began in 2018, has reached a “critical stage,” a source told Fox News Digital last month. Officials are looking into whether to charge the first son with various tax violations and possible foreign lobbying violations.