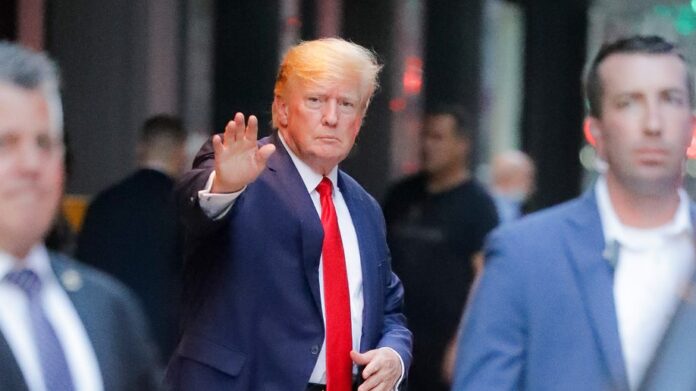 Former President Trump said that his Mar-a-Lago home in Florida is “under siege” by a “large group” of FBI agents.

“Nothing like this has ever happened to a President of the United States before. After working and cooperating with the relevant Government agencies, this unannounced raid on my home was not necessary or appropriate,” Trump said. “It is prosecutorial misconduct, the weaponization of the Justice System, and an attack by Radical Left Democrats who desperately don’t want me to run for President in 2024, especially based on recent polls, and who will likewise do anything to stop Republicans and Conservatives in the upcoming Midterm Elections.”

rump leaving NYC post FBI raid on Mar-A-Lago (Fox News)
“Such an assault could only take place in broken, Third-World Countries. Sadly, America has now become one of those Countries, corrupt at a level not seen before,” Trump said, alleging that the FBI agents broke into his safe.

“What is the difference between this and Watergate, where operatives broke into the Democrat National Committee?” he said. “Here, in reverse, Democrats broke into the home of the 45th President of the United States.”

Multiple sources tell Fox News the FBI’s raid of Mar-a-Lago is related to the materials Trump allegedly brought to his private residence after his presidency concluded.

That matter was referred to the Justice Department by the National Archives and Records Administration, which said it found classified material in 15 boxes at the residence
Federal law bars the removal of classified documents to unauthorized locations, though it is possible that Trump could try to argue that, as president, he was the ultimate declassification authority.

A source familiar told Fox News that FBI agents went to Mar-a-Lago and looked in every single office, safe, and grabbed documents and boxes without going through them on the property. They took boxes and documents to go through them later.
“They were not being judicious about what they took,” the source told Fox News.
South Dakota Governor Kristi Noem, one of many criticizing the raid, called it “an unprecedented political weaponization of the Justice Department.”
They’ve been after President Trump as a candidate, as President, and now as a former President,” Noem tweeted. “Using the criminal justice system in this manner is un-American.”
Trump was in New York City when the raid was carried out and is now headed to Florida, Fox News has learned. An FBI source confirmed that FBI agents from Washington, D.C. who are on the bureau’s Evidence Response Team conducted the raid and notified the Miami Field Office just before.
Per standard protocol, FBI Director Wray and Attorney General Garland were aware of the raid even if shortly before and would have been fully briefed.

A White House official told Fox News it did not have any notice of the reported action and referred all additional questions to the DOJ.
A separate investigation into efforts by Trump allies to undo the results of the 2020 presidential election and the Jan. 6, 2021, riot at the U.S. Capitol has intensified in Washington in recent weeks, particularly with the January 6 congressional committee holding hearings to reveal its findings.
Per sources familiar with the matter, the FBI raid is related to the alleged taking of potential classified information upon leaving Washington on January 2021 – not the January 6th investigation.

Texas law barring most abortions has origins in tiny Waskom

Sept. 11 then and now: See how Lower Manhattan has changed in 20 years