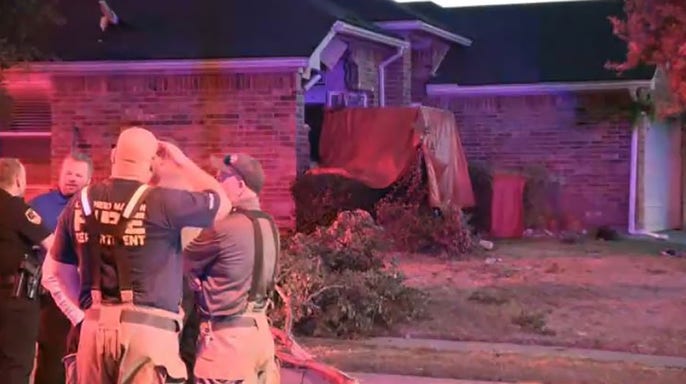 A Texas teen was killed and her father was seriously injured after a suspected drunk driver lost control of his pickup and crashed into the family’s home, authorities said.

Officers responded to the deadly crash at 6:17 p.m. in the 9300 block of Jason Court in White Settlement, White Settlement Police said.
The adult male driver of the pickup truck was hauling a flatbed trailer when he lost control and went off the roadway, police said. The vehicle plowed through a neighbor’s fence and trees before careening across the street and crashing into the home.

The vehicle smashed into a bedroom and another part of the home, FOX4 Dallas-Fort Worth reported.
Police said the teen daughter was pronounced dead at the scene. Her father was rushed to a hospital with life-threatening injuries, according to the station, and her mother suffered minor injuries
The driver was arrested on suspicion of intoxication manslaughter and intoxication assault. It was unclear whether the driver was injured.

A woman who was in the passenger seat was taken to a hospital with minor injuries and was cooperating with investigators.
Police did not immediately release the identities of the victims or those in the pickup truck.

Man falsely claimed that he killed his 3-year-old