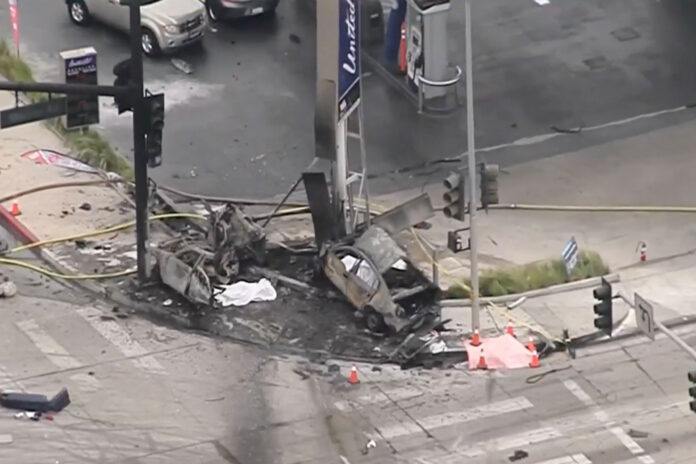 five people were killed and 9 were injured in a fiery multi-vehicle crash at a gas station on South La Brea and Slauson avenues, officials said.
The crash was reported about

Video obtained shows the moment of impact as the driver of a dark-colored Mercedes speeds through a red light — without braking — and strikes two vehicles in the intersection.
The vehicles then careened into a gas station in a ball of fire.

California Highway Patrol officials initially said six people were killed in the crash, but later updated the figure to five.

Among the fatalities: a pregnant woman and her infant, authorities said.

Witness Veronica Esquival said she covered her head for protection, as debris was flying wildly.

“All of the sudden, a baby literally flew from the middle of the intersection to the middle of the gas station and landed right on the floor in front of me,” Esquival said. “One of the workers came and saw me with the baby and took the baby out of my hands.”

Three vehicles were obliterated in the collision. At least two other were damaged.
“We have a total of at least six to seven vehicles involved, at minimum, at this time. Three became engulfed in flames,” said CHP spokesman Franco Pepsi.

US probes rash of health incidents among diplomats in Vienna

Ex-Nazi camp secretary, 96, flees instead of facing 11K counts in her murder trial