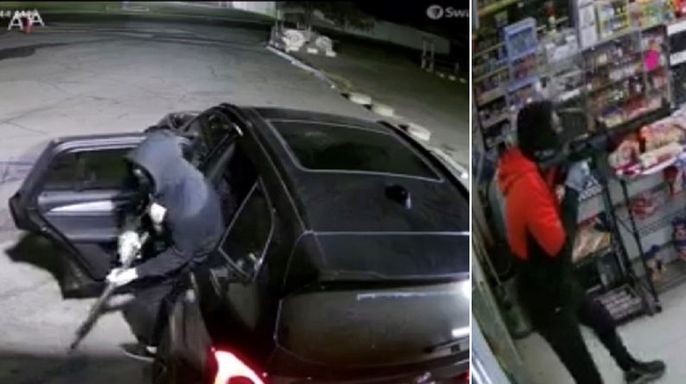 An 80-year-old California liquor store owner was caught on video opening fire at a would-be robber with a shotgun, prompting the suspect to run out of his business screaming “he shot my arm off!”
The self-defense act happened at Norco Market & Liquor in Norco, just east of Los Angeles, after the store owner was confronted by a gunman wielding a rifle.

“In this case, a lawfully armed member of our community prevented a violent crime and ensured their own safety, while being confronted with multiple armed suspects,” the Riverside County Sheriff’s Office said.
Surveillance footage obtained by Fox11 LA shows the masked suspect pointing a rifle at the store owner moments before the owner reached behind the counter, grabbed a shotgun and fired in the suspect’s direction.
Two of the armed suspects police say they have taken into custody following the attempted robbery at a liquor store in Norco, Calif., on Sunday, July 31.

Two of the armed suspects police say they have taken into custody following the attempted robbery at a liquor store in Norco, Calif., on Sunday, July 31. (Riverside County Sheriff’s Office)
The suspect is then heard screaming “he shot my arm off!” as he ran out of the store and into a getaway vehicle outside.
The 23-year-old gunman – who has not been publicly identified – was later tracked down at a local hospital “suffering from a gunshot wound consistent with a shotgun blast,” according to the Riverside County Sheriff’s Office.
He remains in critical but stable condition and will be booked into jail upon his release.
The other men police say were inside the getaway vehicle, who also were found at the hospital, were identified as Justin Johnson, 22, of Inglewood, Jamar Williams, 27, of Los Angeles, and Davon Broadus, 24, of Las Vegas.

The BMW SUV they were traveling in was previously reported stolen and found to contain numerous stolen firearms – and now each of those men are facing charges of robbery and conspiracy and are being held in lieu of $500,000 bail, the sheriff’s office added.
The 80-year-old store owner, meanwhile, is recovering at a hospital after suffering a heart attack shortly after the attempted robbery, according to Fox11 LA.

A man accused of raping a two-year-old girl while a woman took photos inside...

3 teens killed in Brooklyn after cars collided while making donuts

Chiefs Kingdom packing up and flying towards the Ravens