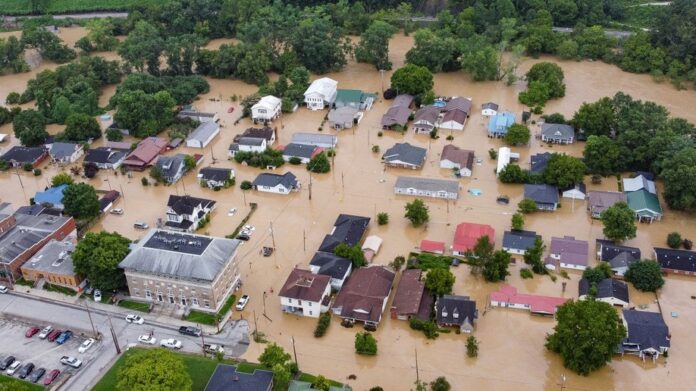 The death toll from catastrophic flooding in eastern Kentucky has reached 16 people, including six children.
“Folks, that’s gonna get a lot higher,” Gov. Andy Beshear said during a Friday briefing. Earlier in the day, Beshear said he expected the death toll to potentially reach 30.
The six children include four siblings – ages 8, 6, 4 and 1 – who were swept away from their parents’ arms in the rising water, Beshear confirmed. The two parents, Amber Smith and Riley Noble, were found alive, the Lexington Herald-Leader reported.
Beshear also confirmed the deaths of an 81-year-old woman in Perry County, a 79-year-old man and a 65-year-old woman in Letcher County, and a 76-year-old woman in Clay County.
Eleven of the deaths occurred in Knott County, including a 63-year-old man, a 65-year-old woman and two children, Beshear said.
Search and rescue teams backed by the National Guard looked tirelessly for missing people — in helicopters and boats — and Beshear noted that determining the number of those who remain unaccounted for is “tough.”
Over 200 have sought shelter and more than 23,000 Kentucky residents were still without power.
According to tracker PowerOutage.us, 23,185 customers were affected following the deadly floodwaters and mudslides that damaged hundreds of homes and vehicles.
In a tweet, Beshear warned that central and eastern Kentucky remain under a flood watch.
While rain totals are not expected to be as high, flooding still remains a concern due to saturated grounds. Please stay safe and alert, Kentucky,” he wrote.
The National Weather Service (NWS) in Jackson tweeted that the area would see a “decent break” from Friday night and into Saturday.
“More rain and storms arrive Sunday through Tuesday, with heavy rainfall possible Sunday and Monday,” it said
The area had already been hit by days of torrential rain, and parts of western Virginia and southern West Virginia were also impacted by flooding.
More than 7,500 outages were also shown in Virginia on Friday.
West Virginia Gov. Jim Justice declared a state of emergency for six counties in his state after severe thunderstorms this week caused significant local flooding.

One dead in Brown County crash