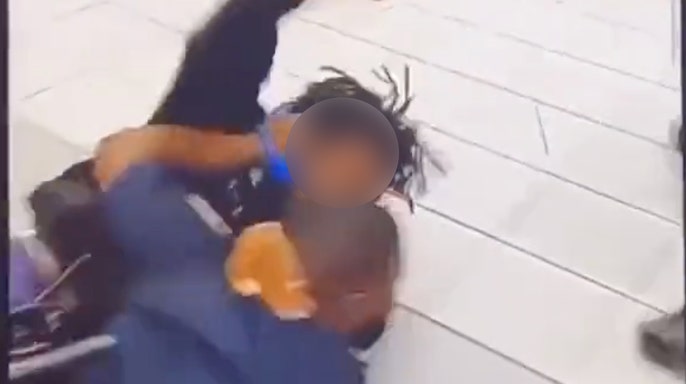 The NYC teen released after allegedly assaulting a police officer in a wild caught-on-video subway brawl was sprung three days earlier for a violent attack and has a prior arrest for gun possession, Fox News Digital has learned.

“The assault on our officers in the subway is another example of individuals emboldened by a system that, just days ago, immediately released one of them after being arrested for robbery,”

NYPD Commissioner Keechant Sewell wrote on Twitter. “Once again, they are shown that there are no consequences for violent criminality.”
The 16-year-old, whose name is being withheld due to his age, was captured in a 54-second clip throwing more than 20 punches at an officer, slamming the cop into a metal gate then dragging him to the floor in a choke hold on
The teen was released without bail in Manhattan Criminal Court on one count of second-degree assault of an officer
Just three days earlier, the same teen boy was busted for robbery – and again sprung without bail – for the vicious beating of a stranger on Madison Ave. and E. 40th St., according to a criminal complaint.

The attack occurred on June 21 when the kid, then 15, and three pals allegedly smashed their fists into a man’s head just after midnight then swiped his cellphone, causing the victim substantial pain and abrasions to his head and hand, the complaint says.

The teen was only identified as the suspect after a lieutenant with the Administration for Children’s Services recognized him in surveillance footage, according to court records.
He was arrested July 20 on eight counts, including second-degree robbery and grand larceny, and released later that day, court records show.
Three days later, the teen and a 16-year-old girl tried to jump a turnstile at the 125th Street station near Lexington Ave. in Harlem at about 6 p.m. in view of two cops, according to police.
When the cops confronted the teens, they became combative.

The suspect can be seen body slamming and choking out an officer.
The 16-year-old male became verbally aggressive for over three minutes with officers,” an NYPD spokesperson said. “The officers attempted to take the 16-year-old male into custody when he began to assault the officers.”
With the consent of Manhattan prosecutors, the assault case was diverted to family court where juvenile delinquents if convicted face significantly lighter punishments than they would if tried as adults.
The teen girl, who appears in the video hitting a cop, was also charged with second-degree assault on an officer, according to police.

Meanwhile, the teen boy’s robbery case is being prosecuted in Manhattan criminal court, not family court, due to a quirk in the state’s bail reform laws. The teen was also arrested in April for gun possession in Brooklyn, according to a law-enforcement source.
“If New Yorkers want to know why the chaos in the transit system is not improving more quickly — this is why,” railed Patrick Lynch, president of the Police Benevolent Association union, in a tweet.