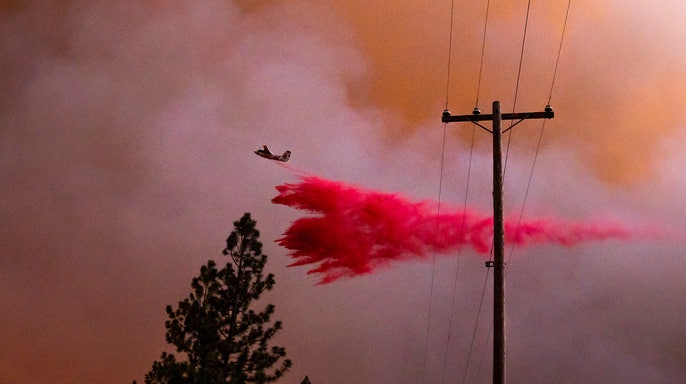 A fast-moving wildfire near Yosemite National Park exploded in size Saturday and prompted evacuations even as firefighters made progress against an earlier blaze that burned to the edge of a grove of giant sequoias.
The Oak Fire, which began Friday afternoon southwest of the park near Midpines in Mariposa County, grew to 10.2 square miles (26.5 square kilometers) by Saturday morning, according to the California Department of Forestry and Fire Protection, or Cal Fire.
Evacuation orders were put in effect Saturday for over 6,000 people living in the sparsely populated, rural area.
“Explosive fire behavior is challenging firefighters,” Cal Fire said in a statement Saturday morning that described the fire activity as “extreme with frequent runs, spot fires and group torching.”
As of morning, the fire had destroyed 10 residential and commercial structures and damaged five more, and was threatening 2,000 more structures, Cal Fire said.
The fast-growing blaze prompted Caltrans to order numerous road closures, including a shutdown of Highway 140 between Carstens Road and Allred Road — blocking one of the main routes into Yosemite National Park.
Hot weather and bone dry vegetation caused by the worst drought in decades was fueling the blaze and challenging fire crews, said Daniel Patterson, a spokesman for the Sierra National Forest.
“The fire is moving quickly. This fire was throwing embers out in front of itself for up to 2 miles yesterday,” Patterson said. “These are exceptional fire conditions.
A shoeless older man attempting to flee crashed his sedan into a ditch in a closed area and was helped by firefighters. He was safely driven from the area and did not appear to suffer any injuries. Several other residents stayed in their homes Friday night as the fire continued to burn nearby.
Pacific Gas & Electric said on its website that more than 2,600 homes and businesses in the area had lost power by Friday afternoon and there was no indication when it would be restored.
“PG&E is unable to access the affected equipment,” the company said.
There’s no immediate word on what sparked the fire.
On Friday, firefighters reported that they have been able to contain 79% of the initial wildfire, the Washburn Fire.
The fire, in the lower Mariposa Grove area near the Washburn trail, forced the evacuation of the community of Wowona and endangered hundreds of giant sequoias, the world’s largest trees by volume.
Wawona Road is tentatively set to reopen on Saturday, according to the park website.
Meanwhile, the U.S. Forest Service announced Friday it’s taking emergency action to save giant sequoias by speeding up projects to protect the trees from the increasing threat of wildfires.
The Save Our Sequoias (SOS) Act was introduced by a bipartisan group of congressman including House Republican leader Kevin McCarthy.
The SOS acts calls for intentionally lighting smaller trees and vegetation during damp conditions with firefighters monitoring.
“The Forest Service’s action today is an important step forward for Giant Sequoias, but without addressing other barriers to protecting these groves, this emergency will only continue,” the group said. “It’s time to codify this action by establishing a true comprehensive solution to fireproof every grove in California through the SOS Act and save our sequoias.”

Ida turned into a monster thanks to a giant warm patch in the Gulf...

How much can some teachers earn in a career? This report gives you an...