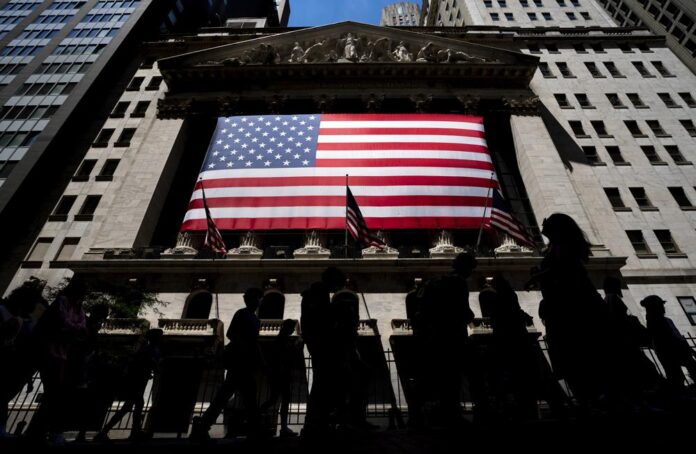 NEW YORK (AP) — Inflation tightened its grip on businesses and consumers during the second quarter and investors expect to see a dent in the latest round of corporate earnings.
Wall Street already had expected relatively muted earnings growth in 2022 following a sharp recovery in 2021 that was driven by pent up demand from consumers. Analysts, though, have been trimming their already modest forecasts for earnings growth during the April-June quarter.
Analysts now expect earning at companies in the S&P 500 index to grow 4.4% for the period, down from their earlier estimate of 5.8% they were forecasting as of late March. Companies have been cautioning investors of weaker results for the period at a greater than normal rate, according to FactSet.
Consumers have been shifting spending from goods to services, like travel and dining out, as they moved past pandemic restrictions. That shift has turned into a broader pullback on spending as prices on everything from food to clothing rise.
Russia’s invasion of Ukraine in February blindsided the global economy by worsening a disconnect between supply and demand for oil, which has pushed gasoline prices to record highs.
The pain at the pump has been a key factor in pushing people to shift spending from discretionary items like electronics and services to more necessary items. Government reports over the last few months have shown that inflation remains stubbornly hot while consumer spending and consumer sentiment drops. Investors are increasingly worried that the Federal Reserve’s attempt to temper rising inflation by aggressively raising interest rates could push the economy into a recession.
The worries about a recession have been weighing on the stock market. Every major index is significantly in the red for the year and the S&P 500 is in a bear market, which is when it is down 20% or more from its most recent high in January.
Recession concerns and the shift in consumer sentiment and spending can be seen in the stark reversal in forecasts for retailers and other companies that rely on direct consumer spending.
Analysts polled by FactSet expected those companies, represented within the S&P 500’s consumer discretionary sector, to notch earnings per share growth of 13.8% at the beginning of the second quarter. They now expect earnings for those companies to fall a 9.3%.
Even broad forecasts for makers of household necessities have shifted from slight growth to a slight pullback. Only energy companies have seen a sharp shift upward for earnings growth forecasts, owing to the surging price of oil.
Companies from a wide range of industries have warned about potentially weak results because of pressure from inflation. Spice and seasonings maker McCormick cited just about every factor driving inflation in its latest warning about its quarterly results.
“We are currently navigating a challenging global environment including persistently high costs, inflation and supply chain challenges, significant disruption in China from COVID-related lockdowns and the conflict in Ukraine,” McCormick CEO Lawrence E. Kurzius, said in a statement.
A variation of that list has been behind many other companies warning about potentially disappointing revenue and profits during the second quarter. Retail giants Target and Amazon have both issued earnings warnings, along with streaming entertainment company Netflix.
“There’s no doubt this has been a difficult two quarters for the market, the U.S. economy, the U.S. consumer, and for the Fed’s job to control and curtail inflationary pressure,” said Quincy Krosby, chief equity strategist for LPL Financial.
Companies have been coping with the tough environment, she said, but Wall Street will be listening very closely to what executives have to say about the rest of the year ahead.
“The ongoing search for clues as to whether the second half of the year can see the market stage a strong recovery will begin with what companies have to say during their second quarter earnings calls,” she said.

Half-shredded Banksy could fetch over $5 million at auction