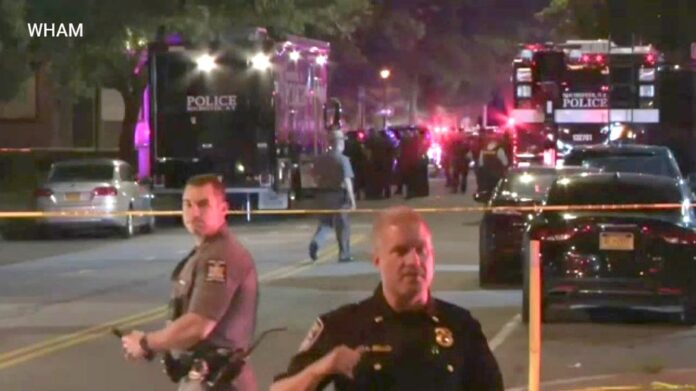 A Rochester, New York, police officer died evening and another officer was injured after they were shot by a suspect while on duty in the northeast part of the city.
Police Chief Dave Smith identified the fallen officer as Anthony Mazurkiewicz, a 29-year-old veteran of the force and a husband and father. Officer Sino Seng, on the force for eight years, was shot in the lower body, Smith said Friday morning.
Smith called the deadly shooting a “cowardly ambush,” and said Mazurkiewicz and Seng “fell victim to the very violence in our community that we are trying to combat.”
Mazurkiewicz was shot at least once in the upper body and passed away after being transported to a local hospital, Smith said. Seng was shot at least once in the lower body and has been released from the hospital to recover at home with his wife and children.
“This is a tragedy for our community,” Rochester Mayor Malik Evans said, according to WHAM-TV. “I’m asking Rochester to pray for these officers and their families. They go out every day and put their lives on the line. And while there are some people who sit on the sidelines, these guys are on the front lines, trying to keep our community safe. We ask for prayers for these officers, their families, the RPD and the entire city of Rochester.”
A woman was also shot, according to the Democrat & Chronicle newspaper.
Her condition and that of the surviving officer are unknown.
The Democratic mayor declared a state of emergency in Rochester over the gun violence the very same day the officers were shot, WHAM reported.
The station reported that 202 people have been shot and 41 have been killed in the city this year – and 82% of the homicides involved guns.
“Terrible news out of Rochester tonight where one @RochesterNYPD officer was shot and killed, and another officer was also shot and is now in the hospital,” New York Rep. Lee Zeldin tweeted. “Prayers up for these officers, their families, and the Rochester community. We must do more to back the blue.”
Zeldin’s tweet came just hours after a suspect attempted to attack the congressman and gubernatorial candidate while he was speaking on stage at a campaign event in Perinton, New York. The suspect, David G. Jakubonis, was charged with felony second degree attempted assault. Jakubonis was released on his own recognizance, according to the Monroe County Sheriff.
Zeldin had predicted Jakubonis’ release on Twitter, writing: “The attacker will likely be instantly released under NY’s laws.”
No one was seriously injured in the attempted attack on Zeldin.