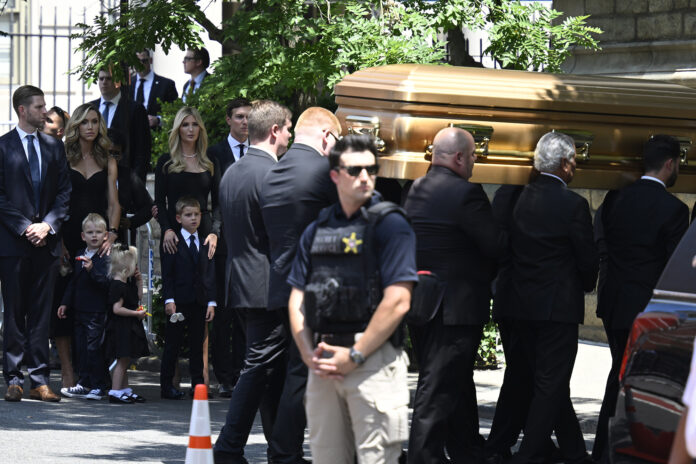 Ivana Trump, the glamorous businesswoman and ex-wife of former President Donald Trump, was remembered as “a force of nature” and “the embodiment of the American dream” at her funeral in Manhattan

“She had brains; she had beauty,” her son, Eric Trump, said in a speech at the historic St. Vincent Ferrer Catholic Church on the Upper East Side.
She was the embodiment of the American dream…She was a force of nature,” he told mourners.
His mom, a former model and onetime professional skier, could beat any man down the slopes, any woman on the runway.”
“She ruled the three of us [kids] with an iron fist but also a heart of gold,” Eric said of himself and siblings Ivanka and Donald Jr

Donald Trump, wife Melania and sons Barron and Don Jr. also honored the Czech-born, famous New Yorker at the private service.
Ivanka Trump and husband, Jared Kushner, along with Tiffany Trump, were in attendance as well. And Eric’s wife Lara Trump was slated to speak at the service, as was Don. Jr.’s teenage daughter Kai Trump.

Ivanka Trump described her mom as a tough-as-nails trailblazer in the business world.
“Growing up, my mother didn’t tell me a woman could do anything she wanted to — she showed me,” Ivanka said. “She was a trail blazer by men and women alike.

My mother once told me there was nothing she couldn’t do in heels,” she said.“She taught us how to spear fish and then cook what we caught.”
She added, “My mom expanded our minds
Clad in a black suit, the ex-commander-in-chief arrived at the Upper East Side house of worship amid tight security, as dozens of mourners gathered on a sidewalk outside to pay respects to the 73-year-old “power blonde,” who died from a fall last week.
Roughly 100 mourners sat inside the church, which was decorated with red roses in honor of Ivana, ex-wife of Donald and mother to three of his five children.

The invite-only funeral was billed a “Celebration of Life,” with the invite featuring a photo of Ivana on the slopes

Before her death, Ivana — whose headline-grabbing marriage to the real estate tycoon she famously dubbed “The Donald” established them as a 1980s New York power couple — had been unsteady walking in recent weeks due to ailing hip, friends had said

She suffered “blunt impact injuries” due to her fall and her death was ruled an accident by the Medical Examiner’s office.

Miley scheduled to start for Cincinnati against Chicago

One dead in a crash on Long Hollow Pike, Goodlettsville

Parents of girl killed in Atlanta see hope in investigation