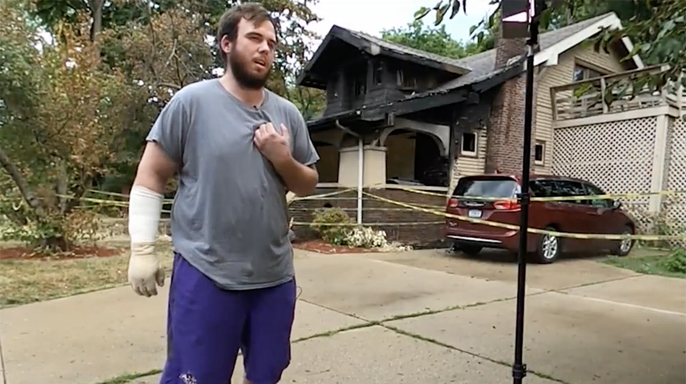 When Nick Bostic saw flames inside an Indiana home in the middle of the night, he pulled over and ran inside to help. Bostic is now being hailed as a hero for saving the lives of five people.

Bostic, a local pizza delivery driver, said he drove past the house and saw flames around 12:30 a.m. He didn’t know who owned or lived in the home but sprang into action.
Bostic went around to the back of the two-story home and opened the back door.
“Before I was halfway into the door, I started hollering if there was anybody in there,” he told “America’s Newsroom”.
Bostic said he started to think the house was empty until four people heard him and ran to him. He then led them outside and asked if anyone was left.

“They said there’s a six-year-old left in there. So, I went back inside,” he told hosts Bill Hemmer and Dana Perino.
Bostic recounted running upstairs and searching through the bedrooms multiple times, but he didn’t find anyone.
When he tried to get back down, the smoke had reached the staircase.
“It scared me a lot,” he said. “But then I started hearing Kaylani’s cry.”

Bostic then ran downstairs into the smoke.
“I found her, and I carried her snug, fit in my arms up the stairs.”
Bostic said he broke a window on the second floor with “no hesitation, no thinking.”
“The poor little girl. The thing she said was, ‘I don’t want to go through the window,’ but we went through the window.”
Though Bostic has no formal training, he said he watches TV shows about police and fire departments,

which he believes helped make critical decisions when inside the burning home.
Bostic’s heroics were captured on bodycam and released by the Lafayette Police Department.

‘I’ll see you soon’; Serena Williams out of US Open citing torn hamstring

At least 10 dead in bombing at restaurant

A Florida woman stabs her boyfriend, is hit by a truck and dies