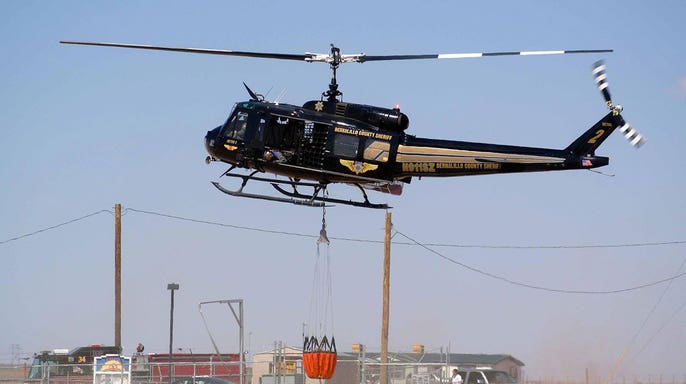 A helicopter for a New Mexico sheriff’s department went down at night while returning from fighting a fire, and all four people who were aboard are believed to have died, according to authorities.

The Bernalillo County Sheriff’s Office confirmed the “fatal helicopter crash” in a tweet. One of the department’s aircraft, Metro 2, was involved in a crash near Las Vegas, New Mexico.
“Preliminary information indicates that 3 BCSO personnel and 1 Bernalillo County Fire employee were onboard at the time of the crash,” the sheriff’s office tweeted. “There are no known survivors. These personnel were headed back to Albuquerque after assisting fire crews with the East Mesa Fire.”

Representatives from the sheriff’s office and New Mexico state police were at the scene. The sheriff’s office said the investigation was in its preliminary stages, but more updates would be forthcoming.
Please keep these individuals and their families in your thoughts and prayers tonight,” the sheriff’s office tweeted. In a follow-up message, the agency wrote: “We need all the prayers we can get right now.”

The National Transportation Safety Board confirmed it was also investigating at crash.
NTSB, which handles civil transportation accident investigations for the U.S. government, tweeted that a crash of a Bell UH-1H helicopter happened near Chapelle, New Mexico.

A man was killed in a fight between motorcycle clubs at Valley View Gas...

Storms, rain and excessive heat roll across parts of Midwest

Liz Weston: How to negotiate your way to a richer life