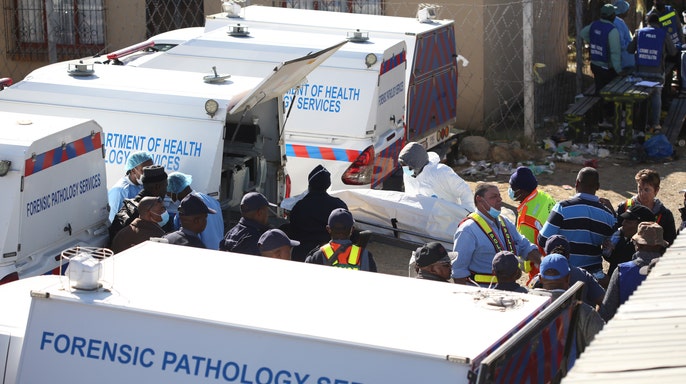 South African authorities are consulting a toxicology lab after 22 teenagers were found dead inside a nightclub on Sunday.
South African officials confirmed that each of the 22 deceased individuals were minors, with the youngest being 13 years old, according to local media. Police minister Bheki Cele ruled out the theory that the deaths were caused by a stampede, telling reporters outside the nightclub on Sunday that the victims showed no outward signs of injury.
The results of the toxicology analysis have yet to be announced.
Cele went on to condemn the owners of the East London nightclub for allowing minors into the venue and apparently serving them alcohol. South African President Cyril Ramaphosa echoed the sentiment, writing in a statement that the club should have been “off-limits” to the minors.
“This tragedy is made even more grave by its occurrence during Youth Month — a time during which we celebrate young people, advocate and advance opportunities for improved socio-economic conditions for the youth of our nation,” Ramaphosa added.
Authorities say the teens were thought to have been celebrating the end of school exams. At least six of the children had yet to be identified as of late night
Local media says the owner of the nightclub, who has yet to be named, may soon face charges for serving alcohol to minors.
The deceased include at least nine girls and 12 boys. Police discovered at least 17 of the teens dead when they arrived at the nightclub at roughly 4 a.m. on Sunday, while at least four others later died at the hospital or on the way to the hospital.

One killed, 5 injured in a shootout over a lost cell phone in San...

3 men sentenced in beating of gay couple in Austin, Texas