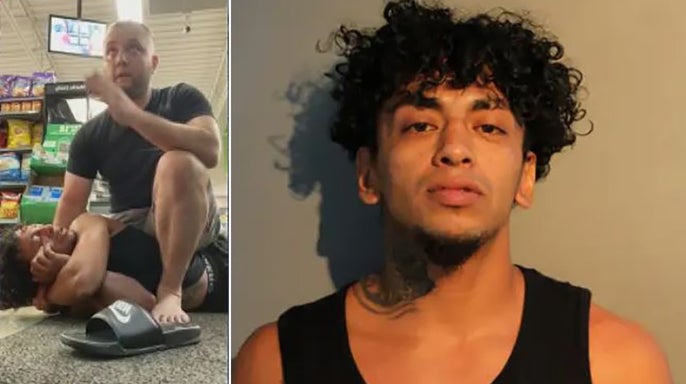 Idriz Redzovic, who has 22 years of training and owns the Supreme Academy of Jiu-Jitsu in Lincoln Park, was buying 7-Eleven Slurpees for his kids when he noticed a man harassing patrons outside the store, FOX32 Chicago reported.

“Once I saw him actually connect and hit the employee in his head, I jumped in, grabbed him like I do in training here, put him down, flattened him like a pancake and then I tied him up like a pretzel in a position called ‘Gift Wrap’ or ‘Twisting Arm Control,’” Redzovic told the station.

Redzovic recorded parts of the incident on Facebook Live. Footage shows him pinning down the suspect for 18 minutes until police arrived and made the arrest, according to the station.
The alleged thief, identified as 30-year-old Christopher Cruz, can be heard pleading with the 3rd-degree black belt to let him go.
Redzovic replies: “No, I’m not letting you go, you were harassing those girls and then you swung at that 7-Eleven employee.”
Police said Cruz had stolen items from the store earlier that day and returned, prompting the 19-year-old employee to ask him to leave. Cruz then allegedly hit the worker.
Cruz was charged with two misdemeanor counts of retail theft and battery.