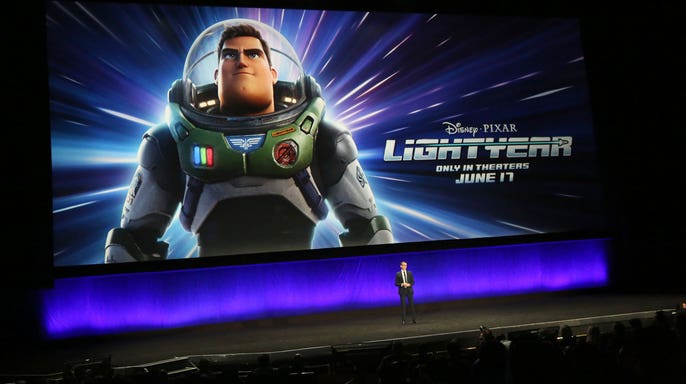 Malaysia and other Muslim countries have banned “Lightyear” from playing in theaters after Disney refused to cut a same-sex kissing scene from the animated film.
The Disney Pixar film was released in theaters on June 17.
Malaysia’s Film Censorship Board said it approved the movie with parental guidance for those under 13 on the condition of modifications. Scenes and dialogues that it “found to contain elements promoting the LGBT lifestyle, which violate key aspects of the Guidelines on the Film Censorship,” were ordered to “be cut and muted.”
“However, the film distributors did not agree to comply with the instructions” and decided instead to cancel the screening, the board said, adding that it would not compromise on any LGBTQ scenes.
The statement did not specify which scenes violated censorship guidelines.
Authorities across much of the Muslim world have barred “Lightyear” from being played at cinemas because it includes a brief kiss between a lesbian couple.
Many Muslims consider gay and lesbian behavior sinful and many Muslim-majority nations criminalize same-sex relationships. The United Arab Emirates also announced it would ban the Pixar animated feature from showing in movie theaters because of the kiss.
The same-sex kiss occurs in the first 30 minutes of the film. The moment occurs between the character Alisha Hawthorne (Uzo Aduba) and her partner.
The scene has received criticism in the United States as well.
“Lightyear” star Chris Evans called people in the U.S. criticizing the scene “idiots” in a recent interview.
The real truth is those people are idiots,” Evans said during an interview with Reuters Television.
“There’s always going to be people who are afraid and unaware and trying to hold on to what was before. But those people die off like dinosaurs. I think the goal is to pay them no mind, march forward and embrace the growth that makes us human.”