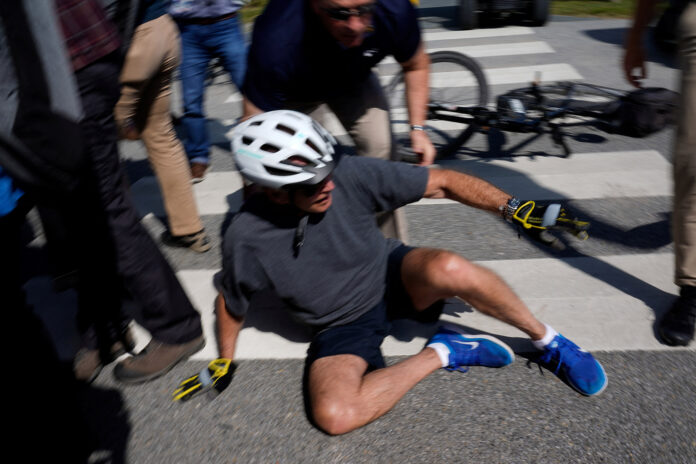 President Biden fell off his bike as he took a ride near his Rehoboth Beach, Del. vacation home.
Secret Service agents swarmed the 79-year-old commander in chief and helped him get upright.
“I’m good, I’m good,” Biden said, telling pool reporters that he tumbled when one of his shoes got stuck in a toe cage on a pedal as he tried to stop and chat with well-wishers.
Biden set off around 8:30 am, surrounded by security agents, and tooled around the bike paths of Cape Henlopen State Park.
An hour later, he pulled away from his wife Jill – who continued on along the path – and cruised over to a group of about 30 curious locals who had gathered near the press pool to watch him pass by.
“Happy Father’s Day,” a woman said, as others clapped.
But the crowd’s greetings turned to gasps as the president keeled over to his right, falling on his elbow and his knee.
As the President said, his foot got caught on the pedal while dismounting and he is fine,” an unnamed White House official said. “No medical attention is needed. The President looks forward to spending the rest of the day with his family.”
But the incident recalled several past plunges taken by the stumbler-in-chief.

Biden has fallen up the stairs of Air Force One repeatedly during the 16 months of his presidency, most recently on June 8 as he left Washington for an interview with Jimmy Kimmel.
And in December 2020, the then-president-elect tripped on a rug after a shower as he chased his dog Major and grabbed the pup’s tail, forcing him to wear a medical boot for weeks.
Once he was vertical on Saturday, Biden briefly answered questions from reporters – after first joking, “I’m not going to talk to you on my vacation.”
He deflected a question on the gun legislation that appears to have stalled in the Senate, and said that he plans to speak with President Xi Jinping of China “soon” about lifting tariffs.
“I’m in the process of making up my mind,” Biden said.

A man is shot dead in Phoenix

Man indicted on capital murder in slaying of Dallas boy