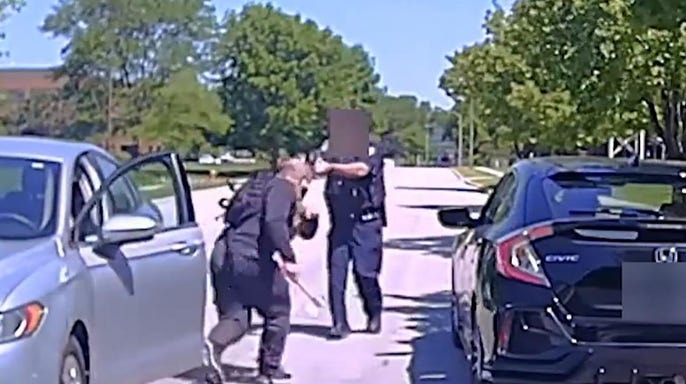 Police released video of a fatal officer-involved shooting from earlier this month when an officer in a Chicago suburb fired several shots at a man who allegedly charged at him with a hatchet while he was conducting a traffic stop.
The Naperville, Illinois police officer was conducting a traffic stop for a minor infraction for around 11 minutes at 11 a.m. on June 3 with a driver who was pulled to the side of the road. That’s when the suspect’s car suddenly pulled up in the middle of the road, the body camera video released by the Naperville Police Department shows.
Dash camera footage from the officer’s patrol car shows the officer open fire at the suspect as he runs toward the officer with a hatchet.
Who are you, dude?” the officer can be heard saying on the video as the suspect starts to get out of his car.
After he gets out, he runs straight for the officer wielding a hatchet, the video shows. The officer fires his weapon several times and the suspect goes down.
“I’ve just been attacked, shots fired, shots fired!” the officer can be heard saying on his radio. He tells the suspect not to move and keeps his gun on him.
“Oh, my G–! Holy s—!” the officer says as he tries to catch his breath from the shock of the attack.
“Stay in your car, man! Don’t move!” he shouts to the person he had stopped who had remained in their car just feet from the incident.
He then calls for a medic.
The suspect, identified as Edward C. Samaan, 28, was pronounced dead at a hospital.
A close-up shot of the suspect’s hatchet as he runs toward the officer.
A close-up shot of the suspect’s hatchet as he runs toward the officer. (Naperville Police Department)
Neither the officer nor any bystanders were injured during the attack, Naperville Police Chief Jason Arres said, adding that “any loss of life is tragic” and their “thoughts” were with the suspect’s family.
Arres said the incident demonstrates “just how dangerous the job of a police officer is.”
The officer, who has not been identified, is a 22-year police veteran
It’s unclear why the suspect drove up and attacked the officer. An independent investigation is underway