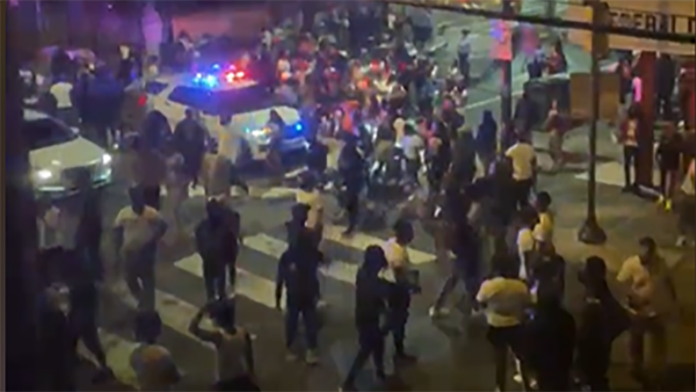 At least three people are dead in Philadelphia and nearly a dozen other victims have been injured during a shooting incident, according to multiple reports.
Authorities responded to the scene in the South Street neighborhood just before midnight, where they found multiple shooters, with one firing into a crowd of people, the Philadelphia Inquirer reported.
Philadelphia Police Department Inspector D.F. Pace said 14 people had been shot, including three who died, per the outlet.
“You can imagine there were hundreds of individuals enjoying South Street, as they do every single weekend, when this shooting broke out,” Pace said, the Philadelphia Inquirer reported.
According to the report, a Philadelphia police officer fired their own weapon at least once toward the suspect before the individual fled.
The suspect was reportedly struck in the arm, but it is not immediately clear if the suspect was hit by the officers’ gunfire amid the chaotic situation.
Eric Walsh, an employee of the nearby O’Neals Pub, said he heard gunshots around 11:30 p.m. and acted swiftly to usher those in and around the bar to seek shelter, the Philadelphia Inquirer reported.

“People were coming off the street with blood splatters on white sneakers and skinned knees and skinned elbows,” Walsh said per the report. “We literally just were balling up napkins and wetting them and handing them to people… it was chaos.”
Videos posted online show several police officers have responded to the scene.
One shooter reportedly dropped a handgun with an extended magazine, which was recovered by police, according to the Philadelphia Inquirer. Officers recovered a second firearm.
No arrests were made at the scene though police said the first suspect is a woman, Fox 29 reported. She was last seen in a 2018 Volkswagen Atlas with the NJ license plate K88-EUL, according to the report.
Among the deceased victims are a 25-year-old woman and a 22-year-old man, police said. Seven injured victims were rushed to Thomas Jefferson University Hospital, per the report.
Their statuses are not immediately known.
Philadelphia is still reeling from nine separate shooting incidents from the night before, Friday into Saturday, that left a pregnant woman dead. At least eight other people were injured, officials said.
The baby the woman was carrying was saved by medical professionals, according to a report. Police are continuing to investigate their respective causes.
An investigation into Saturday night’s shooting remains active.

Rittenhouse hearing to decide on evidence allowed at trial

Escambia County has 13 tips on how to hire licensed contractors