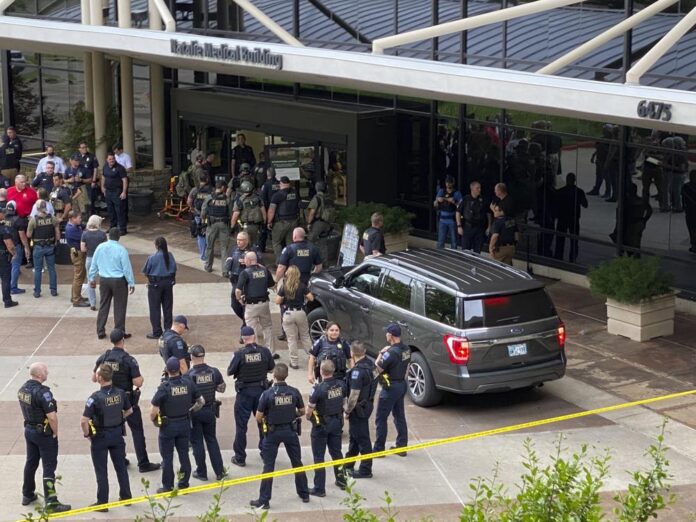 A gunman carrying a rifle and a handgun killed four people at a Tulsa medical building on a hospital campus, police said, the latest in a series of deadly mass shootings across the country in recent weeks.
Tulsa Police Department Deputy Chief Eric Dalgleish confirmed the number of dead and said the shooter also was dead, apparently from a self-inflicted gunshot wound.
The spate of recent gun violence across the country, including the killing of 19 children and two teachers at a Texas elementary school eight days ago by an 18-year-old gunman carrying an AR-style semi-automatic rifle, has led to Democratic leaders amplifying their calls for greater restrictions on guns, while Republicans are emphasizing more security at schools.
The divide mirrors a partisan split that has stymied action in Congress and many state capitols over how best to respond to a record-high number of gun-related deaths in the U.S.
It was unclear what prompted the deadly assault in Tulsa, Dalgleish said.

“It appears both weapons at one point or another were fired on the scene,” Dalgleish said. “The officers who arrived were hearing shots in the building, and that’s what led them to the second floor.”
Police responded to the call about three minutes after dispatchers received the report at 4:52 p.m. and made contact with the gunman roughly five minutes later, at 5:01 p.m. Dalgleish said.
I was very happy with what we know so far regarding the response of our officers,” Dalgleish said.
The length of time it took police officers in Uvalde, Texas, to engage the gunman during last week’s deadly shooting at Robb Elementary School has become a key focus of that investigation. Officers waited over an hour to breach the classroom where the gunman attacked.
Police Capt. Richard Meulenberg also said multiple people were wounded and that the medical complex was a “catastrophic scene.” The exact number of wounded was not immediately available.

Police and hospital officials said they were not ready to identify the dead.
St. Francis Health System locked down its campus Wednesday afternoon because of the situation at the Natalie Medical Building. The Natalie building houses an outpatient surgery center and a breast health center. Dalgleish said an orthopedic clinic also is located on the second floor where officers discovered the shooter and several victims.

Missouri man fatally struck after walking in front of car