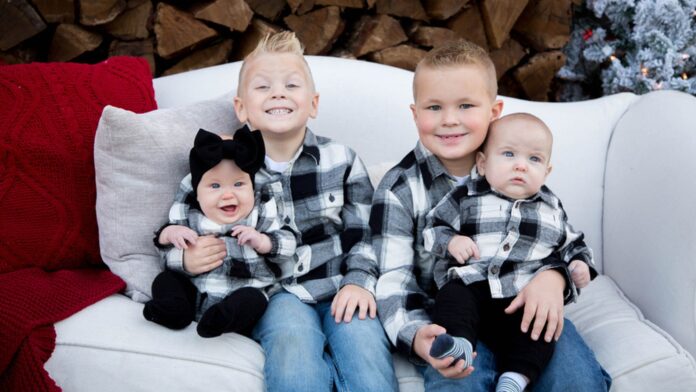 Maryland mom of four children, including 10-month-old twins, is having a heck of a time finding baby formula for her little ones — and she’s really, really angry at the Biden administration right now.
Kayla Zurenko and her husband, Cody, of Calvert County, Maryland, have four children — 7-year-old Gavin, 5-year-old Grayson and 10-month-old twins named Gabriella and Gannon.

“Where am I going to find formula?”
“I have enough formula for two babies for 14 days,” she told Fox News Digital about her current supply. “Where am I going to find formula after that?” she added, becoming upset as she spoke.
The couple live about an hour south of Washington, D.C.
Husband Cody works for Tesla, while Kayla has been a stay-at-home parent since giving birth to their twins last June. The couple enjoy watching their oldest child play baseball; Kayla Zurenko volunteers at the boys’ school as much as possible.

But now, Zurenko has found herself with a new full-time job that she never applied for: searching for baby formula to buy for her children.
She’s been searching for baby formula in her tri-state area of Maryland, D.C. and Virginia and in recent days has found nothing, literally nothing, she told Fox News Digital in a phone interview this week.
It wasn’t until after she ordered baby formula online — then received notice that those orders had been canceled — that she took to social media to vent her frustration.
“This has GOT to be addressed!!!!” Zurenko wrote recently, exasperated. “Raise the gas prices, inflate the food [prices], but give our babies the food they NEED!!!!”

I shouldn’t have to search a tri-STATE area for baby formula,” she added, “and STILL not find any!”
“My online orders are being canceled, stores are out, with no end in sight,” she also wrote. “This should be TOP priority immediately for every government agency and this joke of an administration! THIS IS SCARY!”
In January 2022, Kayla Zurenko came down with COVID-19.
Up until January, Zurenko had been breastfeeding her twins.
She was not familiar with the baby formula shortages that other parents and caregivers had been facing until she couldn’t breastfeed her babies any longer.

That’s because, in January, she came down with COVID-19.

Once she tested positive for the coronavirus, her husband began hunting for baby formula to feed their infants — to no avail. But still, they did not realize the challenges up ahead.

“I sent him for a curbside order and the order got canceled,” Zurenko told Fox News Digital.
“We did a curbside order [from] a Target, and he was able to get that one. Then he brought it home and we were fine,” Zurenko said.
“And then after four days, I went back to breastfeeding when my milk supply came back up. But I realized that it just never came back to a sustainable level after we had COVID.”
Now, Zurenko and her family have joined many American parents in the desperate and ongoing quest for baby formula. And it is clearly taking a toll.

Zurenko said she’s asked family members in Alabama and in Washington State — plus her stepmom in Florida — to keep checking local stores to see if they have any baby formula and, if so, to ship it to the family.
In the meantime, she and her sister-in-law, Casey, are stopping at any Target, Walmart, Walgreens and CVS — “no matter where we are” — to try to find formula.
“Formula is fundamental for all of us moms who don’t have a choice in the matter.”
Zurenko also maps out stores for her husband during his workday, just in case there might be formula available on store shelves during his drive to and from work.

Yet even if the formula is in stock at certain retailers, supplies per person are often limited.

Thompson expected to start as Marlins host the Cubs