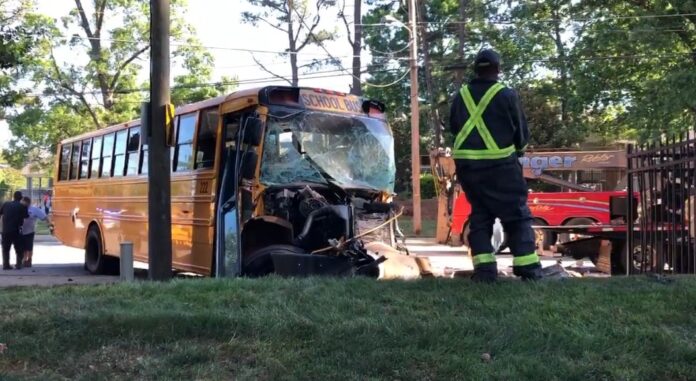 Officials said the crash happened in Charlotte when a Charlotte-Mecklenburg Schools bus headed to South Mecklenburg High School was involved in a crash with a dump truck and another car, news outlets reported.

One person had life-threatening injuries and another had serious injuries, but the 15 children aboard the bus suffered minor injuries, Medic and school officials said.

One student refused treatment and the others were taken to area hospitals, officials said.

Multiple injuries were reported in a south Charlotte crash involving a school bus on morning.

The crash happened on Sharonbrook Drive near Sharon Road West.

According to Charlotte-Mecklenburg Schools, the bus was heading to South Mecklenburg High School when two vehicles hit it.

District officials said initial reports were that 40 students were on the bus at the time of the crash. The number was actually 15.

Medic said there were three vehicles involved in the crash and 17 patients. One person had life-threatening injuries, while one other person had serious injuries.

According to Medic, the 15 students had minor injuries. First responders added that of those, one student refused transport to the hospital, while nine were taken to Atrium Health Carolinas Medical Center and five went to Novant Health Presbyterian for treatment.

Kenny Phillips, Medic operations supervisor, said the crash, which involved the bus, a small dump truck and another car, happened around 6:30 a.m.

The students had low-priority injuries and were taken from the scene by the mass casualty bus, he added.

CFD Capt. Michael Gerin said first responders encountered problems due to the amount of damage to the cars and it took 40 minutes to free the bus driver and about an hour to free the dump truck driver. He added that the jaws of life were used and that both drivers were conscious and stable.

“I am saddened like everyone about the accident that occurred this morning.

My thoughts are with all those involved, the driver, the students, and their families.  I know that the South Meck community is rallying around these individuals as they recover from this traumatic event,” CMS District 5 Board Member Margaret Marshall said

By 9 a.m., cleanup had begun on Sharon Road West and the road reopened shortly before 11 a.m.

Officials said it is too early in the investigation to know if anyone will face charges in connection to the crash. There are currently no details on what led up to the collision.

US troops surge evacuations out of Kabul but threats persist

How to preserve your pumpkins